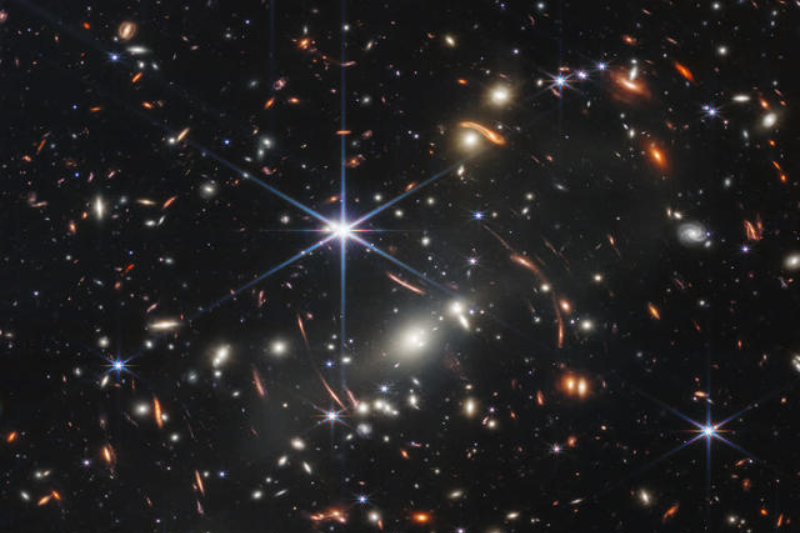 For the first time, a photograph from the new James Webb Space Telescope has been presented in full color. NASA plans to reveal more images from James Webb’s debut in a worldwide presentation on Tuesday.

A new infrared map of the Universe is being hailed as the most comprehensive and deepest to date, containing light from galaxies that has taken billions of years to reach our eyes.

During a White House briefing, US President Joe Biden was presented this image.

In his remarks, President Biden made a few points, “These images are going to remind the world that America can do big things, and remind the American people – especially our children – that there’s nothing beyond our capacity.” Adding that “We can see possibilities no one has ever seen before. We can go places no one has ever gone before.”

All kinds of sky observations will be made, but there are two overriding objectives. It’s one thing to take a look at the first stars to light up the Universe more than 13.5 billion years ago; it’s another to see if there are any planets out there that could support life.

Webb’s ability to achieve the first of these objectives is demonstrated by the image shown to President Biden.

What you’re looking at is a group of galaxies in the constellation of Volans in the Southern Hemisphere, known as SMACS 0723.

A distance of only 4.6 billion light-years separates us from the galaxy’s largest star cluster. As a result, light from things that are considerably further away has been distorted and magnified by the enormous mass of this cluster.

As seen in the image, the warped shapes of galaxies that formed only 600 million years after the Big Bang can be seen thanks to Webb’s 6.5-meter-wide golden mirror and its ultra-sensitive infrared detectors (the Universe is 13.8 billion years old).

Using the quality of Webb’s data, scientists can tell that the telescope is able to see far beyond the most distant object in this image. As a result, it is probable that this is the deepest cosmic field yet observed.

After only 12.5 hours of observation, Webb discovered its super-deep objects. NASA will release further color images from Webb on Tuesday, along with images from the European and Canadian space agencies.

Webb has studied the atmosphere of WASP-96 b, a massive world located more than 1,000 light-years away from the Sun. It will reveal the chemical composition of the atmosphere.

Webb’s program scientist, Dr. Eric Smith, believes the general public is aware of the new telescope’s significance. “The design of Webb, the way Webb looks, I think, is in large part the reason the public is really fascinated by this mission. It looks like a spaceship from the future.”