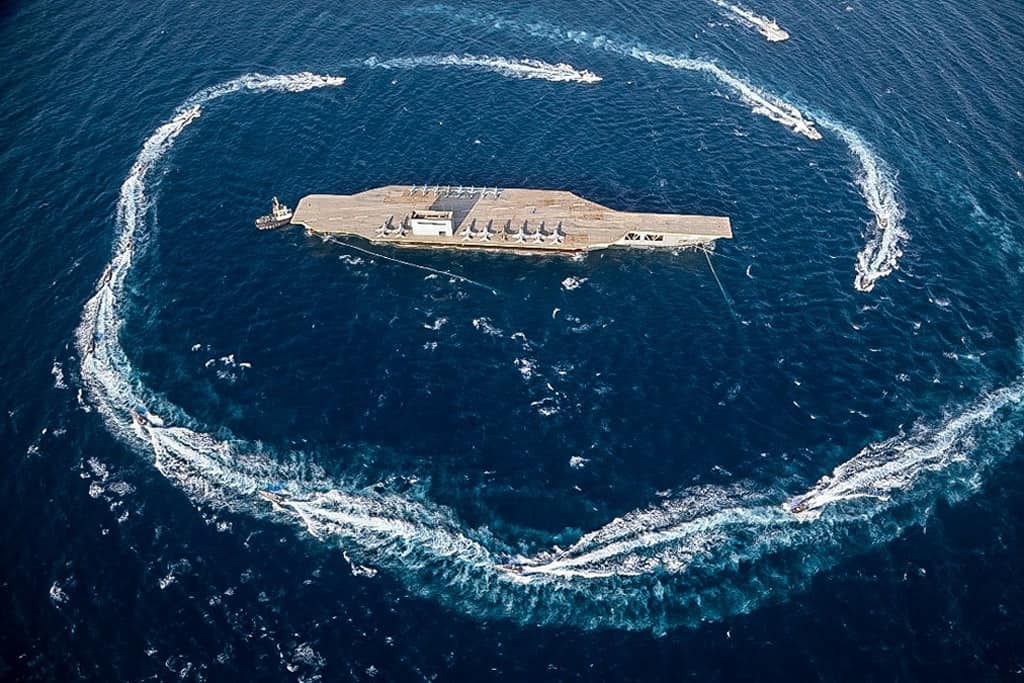 The Strait of Hormuz saw action like as if in the children’s game come alive, as Iran decided to attack a dummy United States aircraft carrier at sea. It was a hilarious show of power, yet insulting to the American sensibilities who called the Iranian action as a poor show to “intimidate and coerce.”

The Iranian military fired away missiles leaving the American side to up their antennas and warn two US military bases in the region on high alert.  The so called mock drill was named as Prophet Mohammed 14th was strangely broadcasted on state television.

Terming it as show of Iranian preparedness at sea through air and naval attack, the mock-up was made to resemble a carrier the US routinely sails into the Gulf. All done up with dummy fighter jets on either side of its landing strip, missiles were launched from a variety of angles, including some aimed at the carrier.

Showing a sense of frustration getting to the Iranian side, the exercises have been taken as complete act of hostility from the American counterparts, which has said that “The US Navy conducts defensive exercises with our partners promoting maritime security in support of freedom of navigation; whereas, Iran conducts offensive exercises,” said Commander Rebecca Rebarich, spokeswoman for the US Navy’s Bahrain-based Fifth Fleet.

Post the firing of the ballistic missiles, the US bases in Qatar and UAE were put on high alert.  The tension between the US and Iran has been at its peak, and might have gone on the backburner since the onset of the Covid-19 led lockdowns. But Iran has been trying to get back at the US for it having throttled the economy and Tehran having to manage an exasperated civilian population.

The suffocating number of sanctions has left Iran dry of its oil exports, leave alone chances of conducting trade with other countries. Moreover, its lack of preparedness and indulgence in religion driven politics has left its population with less to no faith in the current governance either. In November last year, the US had to intervene to ensure Iran did not cut access to internet for its civilian population, as a straight violation of human rights and right to free press and information.

Real damage to fake ship: Newest @Maxar satellite images from today show some of the damage to fighter jets on the mock aircraft carrier, as well as to the bow of the vessel. The vessel is part of #Iran military exercise in Strait of Hormuz pic.twitter.com/nOlVEPS6EQ