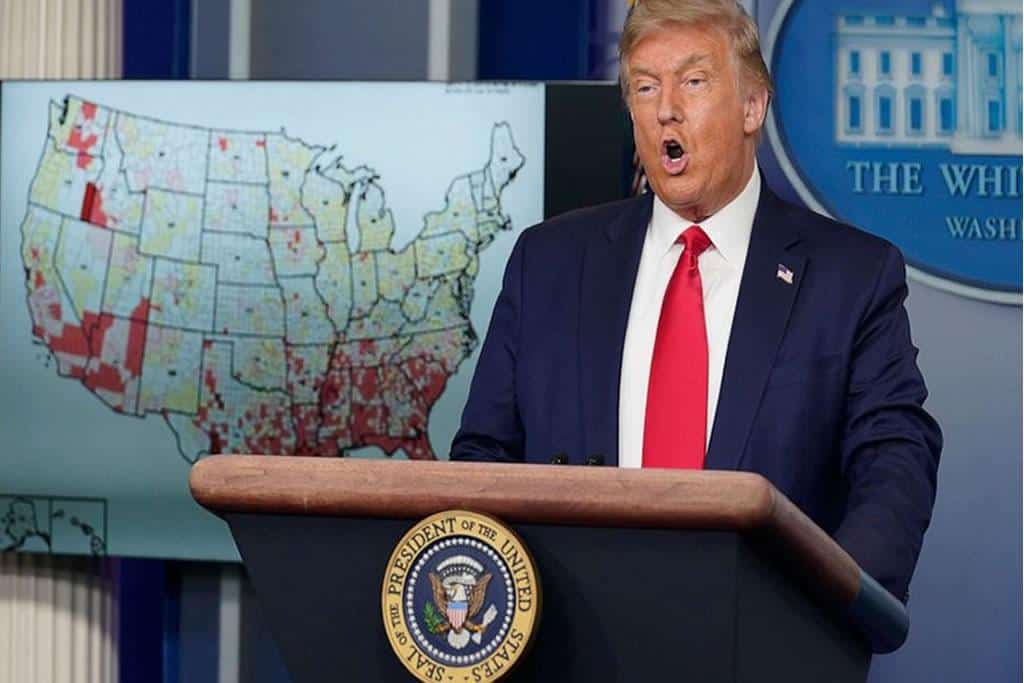 Trump surrenders to COVID and cancels the Jacksonville Republican Convention. After underestimating the epidemic for over six months, pushing for an electoral hurried economy’s reopening that is now causing a spike in contagions and deaths, the US president has been forced to accept the reality. So, he canceled the appointment he cared about most, that is, the crowds in Florida. COVID-19 continues to spread worldwide, with 15 million positive people. Of these over 8 million in the American continent. On Thursday, the United States registered a new record of coronavirus contagions: 76,500. More 1,225 deaths, according to Worldometer.

With over 144,000 deaths, the country is by far the most affected in the world in absolute terms, ahead of Brazil and the United Kingdom. Donald Trump, for the first time, decided to cancel an event he was due to attend: The Republican convention in Jacksonville, Florida.Amid an election campaign because of the unexpected and problematic presidential elections, Donald Trump still has the card of security and public order. Objective: to paint the Democrats as weak on the subject of crime, irresponsible who risk leaving the country in the hands of radical and far-left or anarchist fringes.

In the past few hours, an opportunity to accelerate security has come again from Portland, Oregon, Northwest of the United States. Here Trump has sent hundreds of federal agents in a campaign against crime that has deliberately targeted the city led by Democratic leader. Portland has been the theatre of the main protests of “Black Lives Matter” movement, against police racism and held up by the US leader Trump as the most violent in America. That is an extension of the LeGend operation, named after a 4-year-old boy, LeGend Taliferro, killed in Kansas City, Missouri, in June while he was in his apartment, hit by the shots of a running car. Yesterday’s mother said she was in favor of the operation, which aims to tame the crime. Democratic cities are in turmoil. As a result, during the protests against police never dormant in Portland, Democrat Ted Wheeler ended up under the tear gas of federal agents. The mayor was with the protesters behind the protective fence mounted around the court when the agents hit him.The scene is the perfect photo of the conflict that Trump is looking for. On the one hand, an exponent of the opposition alongside the protesters who oppose the police. On the other, the order in person: the agents sent by the president to fight crime.

Watch President Trump saying that he has canceled the Florida component of the Republican National Convention:

#BREAKING: President Trump says he has canceled the Florida component of the Republican National Convention

“I told my team it’s time to cancel the Jacksonville, Florida component of the GOP convention.”

“To have a big convention, it’s just not right.” pic.twitter.com/P4zAHmrabV