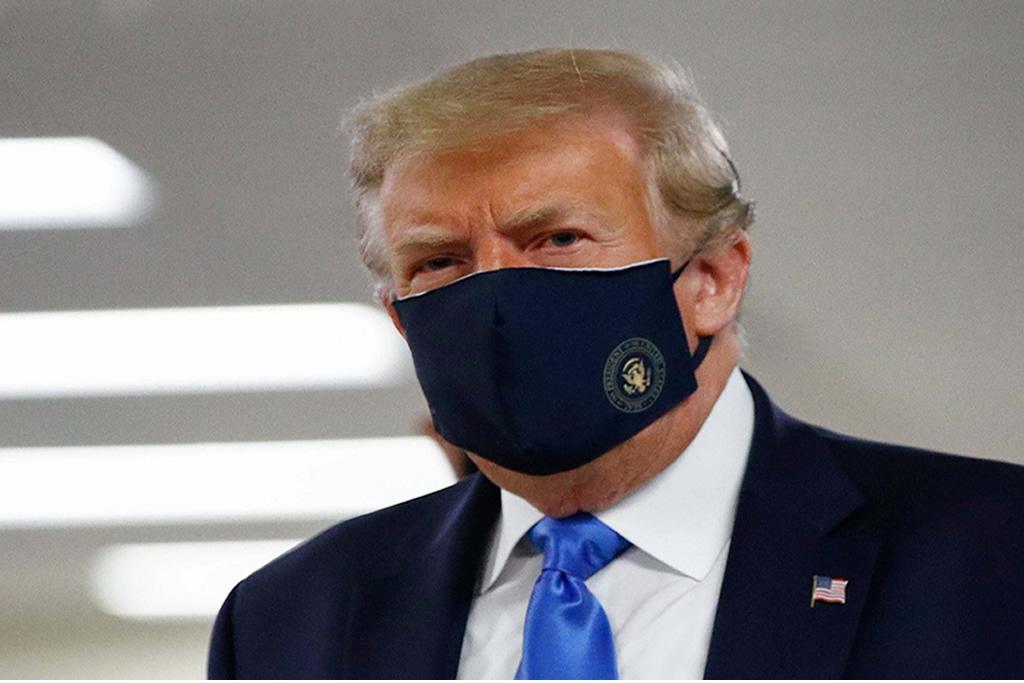 After months of declining to wear a face covering at public events amid the novel coronavirus pandemic, the United States President Donald Trump on Monday saidon Twitter that it’s “patriotic” to wear a face mask.“We are United in our effort to defeat the Invisible China Virus, and many people say that it is Patriotic to wear a face mask when you can’t socially distance,” Trump wrote. “There is nobody more Patriotic than me, your favourite President.”

Donald Trump affirmed, posting a photo where he is wearing a facemask in public for the first time at the Walter Reed National Military Medical Centre in Washington, D.C., where he met wounded service members and health care providers caring for COVID-19 patients.As he departed the White House, Trump told reporters: “When you’re in a hospital, especially … I think it’s a great thing to wear a mask.”

We are United in our effort to defeat the Invisible China Virus, and many people say that it is Patriotic to wear a face mask when you can’t socially distance. There is nobody more Patriotic than me, your favorite President! pic.twitter.com/iQOd1whktN

Before this event in Washington, Trump had declined to wear a mask at public events including news conferences, rallies and during updates from the coronavirus task force.Trump has also repeatedly referred to the new coronavirus(COVID-19) as the “Chinese virus,” as the virus was first detected in Wuhan, China last December.

Since it was discovered, the virus has infected more than 14.6 million people around the world, according to the Johns Hopkins University latest data. So far, according to the Worldometer, the US recorded in total 3.9 million confirmed cases and 140,811 people have died as a result of COVID-19.More than 70,000 new coronavirus cases have been recorded daily in recent days in the U.S.

“We do have embers, we do have flames,” Trump said of the recent surge in cases, while claiming, “It’s going to be under control.” The president played down the threat, saying that many of those catching the virus are young people who will quickly recover. “They have the sniffles,” he said.Trump contended, as he has in recent weeks, that the number of confirmed coronavirus infections in the U.S. is increasing because of the thousands of tests it has conducted, even though the growth in the number of infections is outpacing the increased number of tests.

“It really skews the numbers,” Trump said of the increased testing. As the White House and Congress consider another funding plan to help the country recover from the pandemic, Trump aides are opposing more money for increased testing, according to reporting by The Washington Post.Asked why the White House has attempted to discredit Fauci, Trump said, “Dr. Fauci made some mistakes,” while adding that he personally has a “great relationship” with him. Still, Trump called Fauci “a little bit of an alarmist.” But the president dismissed his own early mistakes, including a comment that the coronavirus would “just disappear,” from 15 cases down to zero.“I’ll be right eventually,” Trump declared. “I’ve been right probably more than anyone.”  Health experts predict that tens of thousands more Americans will die from the pandemic in the coming months.