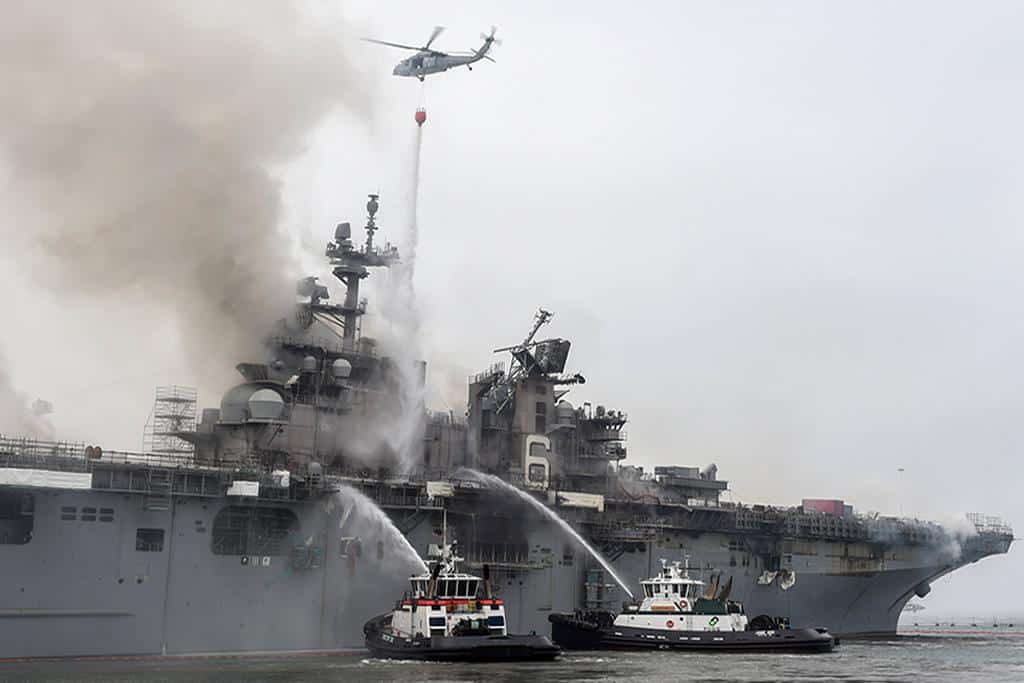 A million dollar US Navy warship was under a massive blaze for four days before the raging fire could be extinguished. The effect of this will be however felt for years to come as US’s Pacific Fleet has reversed back years together.

The amphibious assault ship USS Bonhomme Richard was at port in San Diego where it was undergoing upgrades and maintenance, when onboard fire caused huge damage to ship before it was put out on Thursday last week. The massive blaze onboard the navy warship caused the temperatures to reach up to 1200 degrees Fahrenheit, causing the aluminum to melt and burning the wiring, plastics and combustibles on the ship like dry wall, bedding and office supplies, bringing the 850 foot long vessel to smoke.  The exact extent of damage needs to assessed by the expert engineers once the vessel cools down.

Helicopters from Helicopter Sea Combat Squadron 3 combat a fire aboard the amphibious assault ship #USSBonhommeRichard (LHD 6). On the morning of July 12, a fire was reported aboard the ship while it was moored pier side at Naval Base San Diego. pic.twitter.com/CAzxhgw6Gh

On Friday, US Navy’s top officer and Chief of Naval Operations Admiral Mike Gilday said that there would be extensive investigations to expose the true cause of fire. He said, “We will fully investigate what happened here so that we learn all that we can from this terrible tragedy.”

Rear Admiral Philip Sobeck, Commander of Navy’s Expeditionary Strile Group Three said, “It is too early to make any predictions or promises of what the future of the ship will be. Whether or not it will be repaired will be determined.”

The long-term impacts of this massive loss are going to be particularly significant, experts say. The vessel USS Bonhomme Richard is a smack of a “baby aircraft carrier”. It was under upgrades so as to accommodate the latest and one of the most sophisticated US arsenal’s warplanes Marine Corps F-35Bs. If still operational, the ship would have been the only one of total 4 ships in the US fleet to have the capacity to handle the F-35Bs. The absence is definitely going to impact the logistics and the abruptly dismantled future plans of US Navy.

Former US Navy Admiral John Kirby said, “As tensions mount with China in the South China Sea, as well as with North Korea, the loss of this ship and her capabilities will make it more difficult for the Navy to meet all its war-fighting requirements.”

The past few weeks have seen regular deploying of F-35Bs in the Indo-Pacific region that has reminded the countries of technological edge enjoyed by US military and defense over the rival nations like China and North Korea.

Get a firsthand look as Sailors and Federal firefighters responded to a fire onboard the #USNavy amphibious assault ship #USSBonhommeRichard (LHD 6) at Naval Base San Diego. July 12, a fire was called away aboard the ship and continues to be fought. pic.twitter.com/UHb9OV2d3j

After this loss, USS America is filling in for the Bonhomme Richard, and will be operating from the US Navy base in Sasebo, Japan. The USS America is also an amphibious assault ship, but of a newer version which is also capable to deploy the F-35Bs. USS Tripoli, the latest addition to the US Navy fleet, has also been added after being commissioned on Wednesday.

The experts however say that absence of Bonhomme Richard can really have significant toll. The vessel was supposed to return to fleet this fall post the upgrades and maintenance. Now the ship replacing it would too require the said upgrades making a significant delay in the plans. This can have a “snowball effect”, experts believe. To make up for the loss, US military would have to cut back on planned missions or the ones in future, or might have to overwork the existing crews to meet the obligations – both of these carry huge risks. Cutting back on operations can make a wide gap in US’s operational presence in the world, related to naval sector. This can bolster the regular trials by China to rise up.