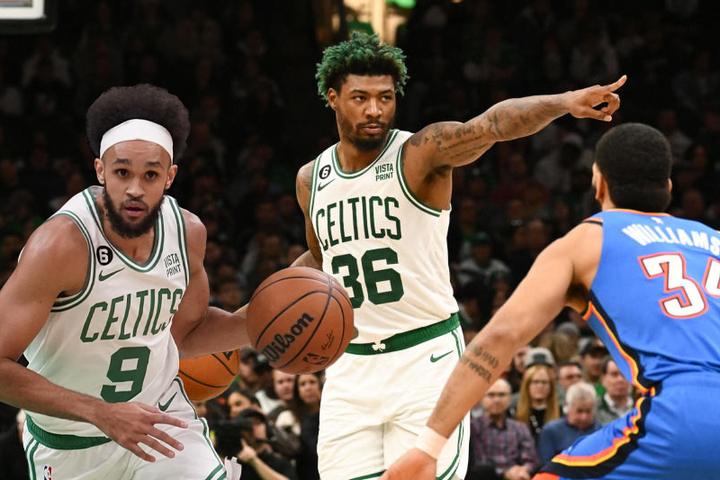 Marcus Smart heated up in the fourth quarter and finished with 22 points, eight assists, and five rebounds to propel the Celtics to their eighth consecutive victory.

Jalen Williams’s drive at 4:33 of the third quarter gave the Thunder a 15-point lead, but the Celtics closed the gap to single digits with five consecutive baskets from Pritchard to end the period. A steal and layup increased the score 96-89 entering the fourth quarter.

In the first minute of the fourth quarter, Pritchard scored a 3-pointer from the wing to trim the Thunder’s advantage to 99-94. Tatum’s dunk with 5:59 remaining tied the score at 107. This was the closest the Celtics would reach until Brown and Tatum went on an 8-0 run, tying the game at 107.

Neither side led by more than two points until Tatum’s layup with 3:43 remaining. The Thunder pulled into a couple of three-point leads before the Celtics embarked on an 8-3 run that included three-pointers from White and Smart.

On two instances, the same combo gave Boston a five-point lead, only to have Gilgeous-Alexander and Dort cut it to one possession. Tatum won the game with a free throw.

Celtics’ 69 first-half points surrendered against Oklahoma City were the most this season. Gilgeous-Alexander scored 18 points on 6-of-12 shooting before halftime, contributing to the Thunder’s nine-point advantage at the break.

The Thunder shot 50 percent in the first quarter, but a Pritchard put-back at the buzzer got the home team within 35-32.

Horford’s 3-pointer at 5:41 gave Boston a 17-16 lead, but Gilgeous-Alexander and Dort’s 3-pointers during an 8-0 run for the visitors gave them the advantage.

The Thunder led 69-62 at halftime and opened the third quarter 6-for-11 from the field to help construct a 12-point advantage.