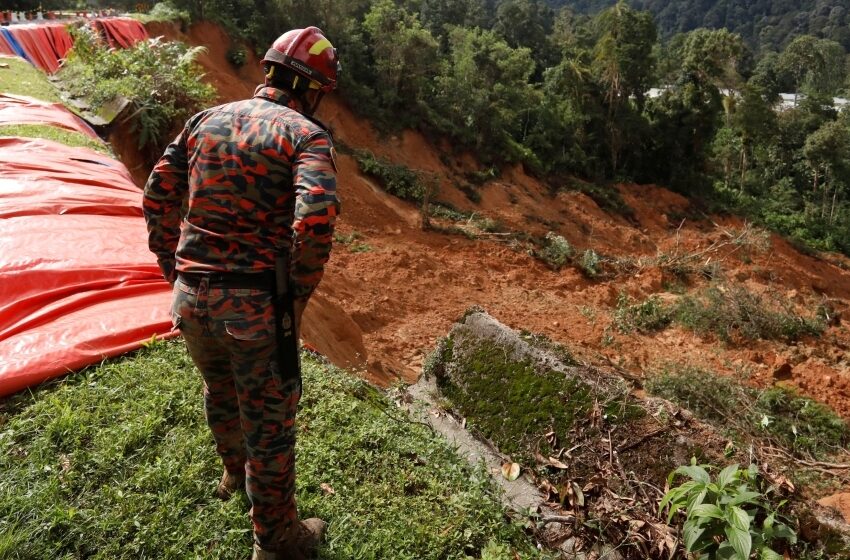 The dead, including seven children, were sleeping in tents at Batang Kali, a popular highland location approximately 50 kilometers (30 miles) north of the capital Kuala Lumpur when a landslide tore through the campground early on Friday morning.

The Selangor state fire and rescue service said that 61 of the 94 individuals swept away by the mudslide were accounted for, while 9 remain missing.

Heavy rain has raised the possibility of more landslides, prompting search and rescue crews to boost the number of excavators and rescue dogs in an effort to locate campers who may be buried in mud and debris.

The police chief of Hulu Selangor, Suffian Abdullah, stated that the operator and two employees of the campground at Father’s Organic Farm had been questioned.

Authorities said that the owners were permitted to operate organic farms on the land, but had not filed for permits to operate three campgrounds.

The proprietors of the property did not reply promptly to a request for comment.

“Our emotions are firmly tied to yours, may the dead rest in peace… Pray for the surviving and the injured,” it stated in a Facebook post directed to victims and their relatives.

Saturday, state fire and rescue commander Norazam Khamis stated that the likelihood of discovering further survivors was remote due to the absence of oxygen and mud pressure on the site.

Initial research revealed that a 450,000-cubic-meter earth embankment had fallen. The 30 m (100 ft)-tall landslide covered an area of approximately one acre (0.4 hectares).

Saturday evening, the family of 31-year-old Nurul Azwani Kamarulzaman, who died in the disaster, held her funeral in a Kuala Lumpur cemetery.

A kitchen assistant in a school cafeteria, Nurul Azwani, was on a two-night excursion with teachers and students. She was planned to return on the day of the catastrophe, Friday.

Mohd Shazwan Ashraf Mohamad Saberi, her brother-in-law, stated to Reuters, “We never anticipated a natural calamity to occur. We are unable to process this at this time.”

In Malaysia, landslides are prevalent, however they normally occur only after significant rainfall. In seven states, over 21,000 people were affected by flooding last year due to heavy rainfall.