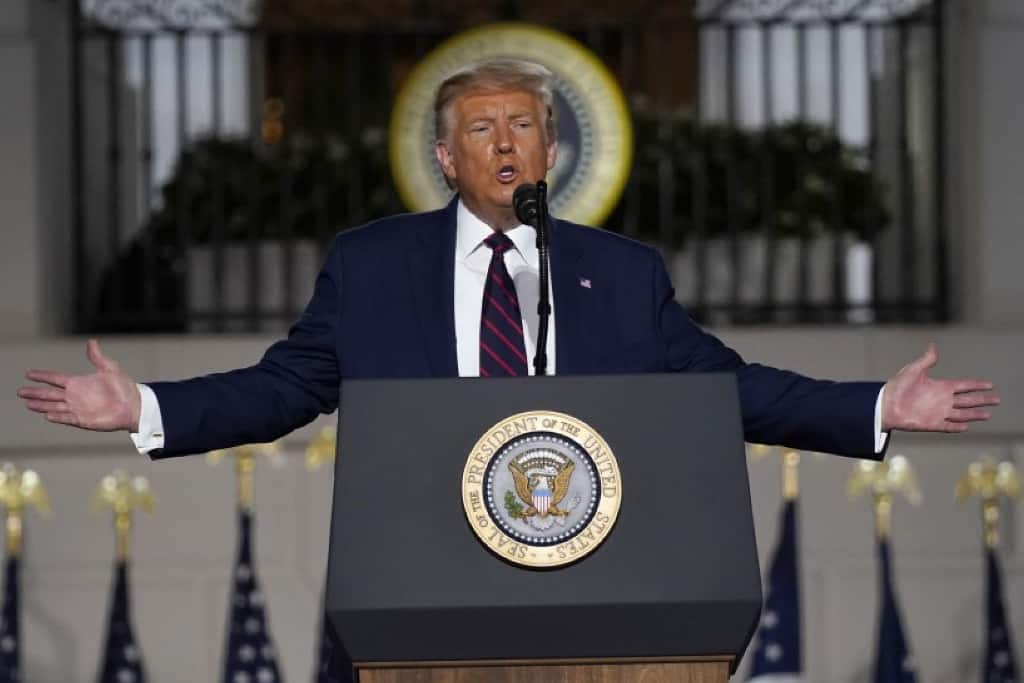 An extravagant final night of the Republican National Convention displayed a norm crushing event at backdrop of White House, where President Donald Trump officially accepted his nomination and gave the longest ever speech at such event, before a grand gathering that is potentially a super spreader viral event. It also gave the unimaginable and unaware the reason why Democrats think Trump must be driven away from the White House and magnificent power the presidency brings and why he must not be reelected for a second term.

President Donald Trump gave his acceptance speech before a large GOP gathering that was a massive propaganda of western democracy in the modern era. Trump painted an apocalyptic picture of what country would be like if Biden-Harris are elected. He had a vision that “violent anarchists” would exploit Joe Biden who he quoted as “weak” and that would “destroy America”. On accepting the Republican presidential nomination, Trump turned his back on crowd and stretched his arms at White House – like he was exemplifying his vision of next four years having the unaccountable power. He said, “The fact is, we’re here and they are not.”

Trump’s speech was more of a monotone, largely guided by the teleprompter and was mainly lingering on what hazard Biden would bring if he is elected – largely his nightmarish vision. His energy was low and body lacked confidence with leaning to the podium. He essentially lacked the electric performance that his other speakers presented during last three days of the RNC. The culmination of RNC was adorned by massive fireworks, befitting 4th of July celebrations, and that is largely why Trump is attractive to so many Americans – the pomp and glamour that he brings to office embraces well his personality.

Over 1000 people gathered in the South Lawn of White House, with no masks and nil physical distancing displayed a sheer mockery of current global pandemic crisis and the warnings and recommendation of health experts and organizations. A clear display of how lightly the current administration is taking the seriousness of unprecedented global health crisis and how frenzied and unrationedtheirstance is. On being questioned a White House official said, “Everyone is going to get infected one day.” This is shining example of the mindset of people in White House.

Convention being held at White House premises too has raised lot of questions as this is against the law to hold a political rally or convention for self-motive on grounds of the powerful building. Experts suggest this as a clear violation of the Hatch Act.

While the glorified convention and speeches were going on, a mass rally was in front of the White House with protestors supporting Black Lives Matter and calling removal of current president from power. Not just Washington D.C. but many cities like Los Angeles, and Kenosha were burning with protests after Jacob Blake was shot seven times in Kenosha, Wisconsin. But the most disturbing unfolding was that not once did President Trump acknowledge the current state of disturbance in country. It was dejected and ignored.

Come November, the Americans have a clear picture of Presidential candidates. What is the stand of both Trump and Biden is very much in the forefront after two weeks of national conventions of Democrats and Republicans.

No reforms yet, Lebanon still in political limbo
Geopolitics at the time of COVID-19