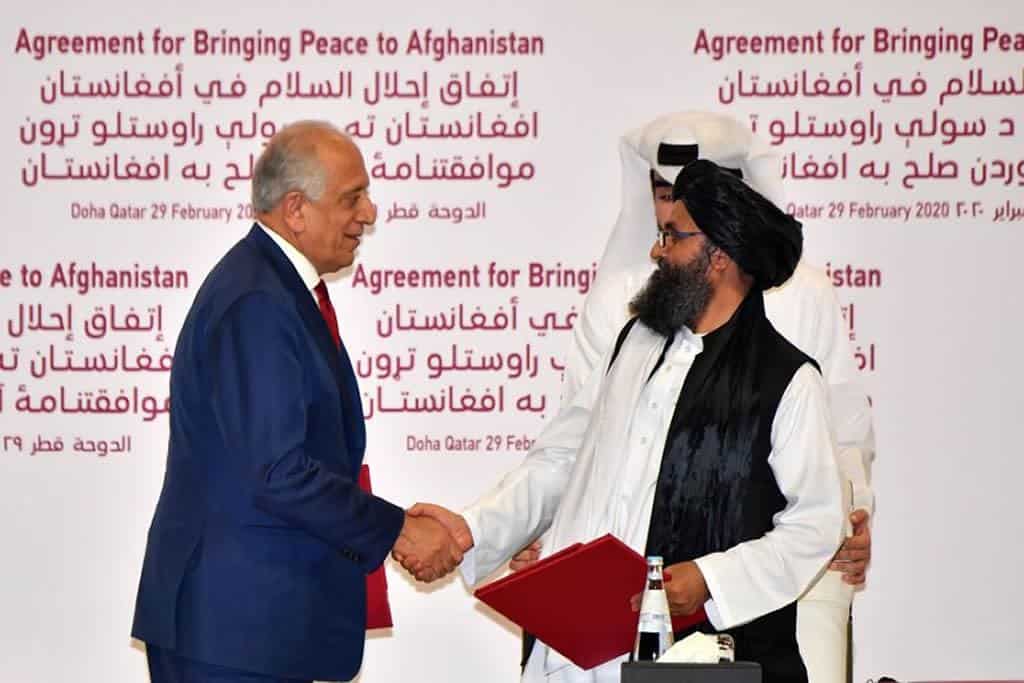 Senior US officials restarted negotiations with the Afghan Taliban’s leaders about the implementation of the peace agreement signed between the two parties in February in the Qatari capital, Doha.

Suhail Shaheen, a spokesman for the movement’s political bureau, said that his delegation, led by Mullah Pradar, the deputy leader of the Taliban, met late Monday with the American Special Representative for Afghan Reconciliation, Zalmay Khalilzad and General Scott Miller, commander of the American forces in Afghanistan, in the presence of the Qatari foreign minister and Deputy Prime Minister Muhammad Bin Abdul Rahman Al Thani.

Shaheen said in a statement that during the meeting, “there were talks about the full implementation of the agreement’s terms and the dilemma of postponing the release of prisoners.”

On Monday, the US State Department said in a statement that Khalilzad would meet Taliban representatives to discuss current challenges in implementing the agreement between the Afghan Taliban movement and the United States. On April 5th, the Taliban threatened to resume their attacks on a large scale unless the peace agreement was respected by all parties.

“We respect the peace agreement. Nevertheless, the American side and its internal and external military supporters are targeting the civilian population and Taliban centers that are not even on the battlefield,” the Taliban said in their statement.

“The process of releasing 5,000 prisoners was also postponed due to the Afghan government’s arguments, which have been described as “weak.” The Afghan Taliban added.

The Afghan government insists on their release in stages, along with a ceasefire and direct talks between Afghans.

The talks, which were held despite the global pandemic of the Corona Virus, came after some progress was made regarding the prisoners’ release, as Kabul released about 300 detainees, while the Taliban released a first batch of government prisoners which seemed to be a good start for both parties, but not enough to implement what have been signed.

The dispute over the release of prisoners, increased attacks by the Taliban and other issues have frozen the Washington-led efforts to end the longest American war and decades of conflict in Afghanistan.

The Taliban accused the United States, last week, of violating the agreement by supporting Afghan security forces’ operations in some areas of the country and warned that any such support would jeopardize the agreement.

There was no comment from the US State Department, which had previously announced that Khalilzad would meet with Taliban officials to discuss “the current challenges in implementing the agreement between the United States and the Taliban.”

[…] Taliban militias have killed on Monday at least 23 Afghan soldiers and nine civilians, according to officials, at a time when Afghanistan is witnessing a new wave of violence despite the agreement concluded by the rebel movement with Washington in Doha and the crisis of the new Corona outbreak that is getting worse every day. […]