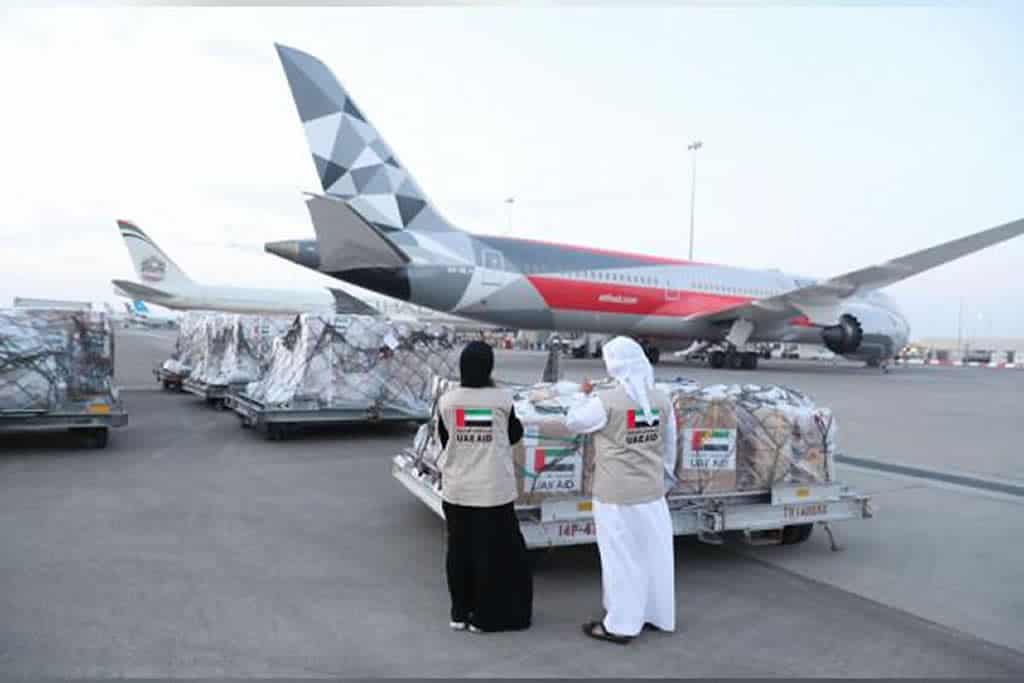 For the past several years, the UAE’s global stature in the humanitarian field has grown steadily, enhanced by its generous distribution of international aid. The UAE has consistently topped the rankings of generous donor aid. According to the Organisation for Economic Co-operation and Development, the UAE is the world’s largest donor of official development aid, relative to its national income when the country spent 1.31 percent of its gross national income (GNI) on foreign developmental assistance. They gave 1.01 and 1 percent of their GNI respectively, contributed AED 173 billion in foreign aid, also ranking second among the largest donor states in the Official Development Aid (ODA). To date, the UAE has provided more than 320 metric tons of relief to over 30 countries, supporting nearly 320,000 medical professionals in the process.

The numerous initiatives undertaken by the UAE leadership, to globally combat the spread of COVID-19, confirm that UAE’s assistance has only humanitarian purposes. To date, the UAE has provided more than 320 metric tons of aid to over 30 countries, supporting nearly 320,000 medical professionals in the process. On April 6, an aid plane carrying approximately 10 tonnes of medical supplies was dispatched to Italy, benefitting over 10,000 healthcare professionals. UAE also sent an aid plane containing 14 metric tons of medical and food supplies to Pakistan, assisting approximately 7,000 medical workers. The UAE delivered the first batch of critical medical supplies to Pakistan on April 2. On April 5, the second batch of 11 metric tons of medical supplies provided by Abu Dhabi arrived in Islamabad. Previously, the UAE government has announced the provision of $200 million in financial assistance to the Prime Minister’s Kamyab Jawan program for youth development.

The Gulf Country also provided 11 metric tons of medical supplies to Ukraine, after the aid plane succeeded in repatriating 113 Ukrainian citizens from the UAE, as a result of coordination between Emirati and Ukrainian authorities to ensure their safe return. From the beginning of the pandemic, several aid planes took off from Abu Dhabi to Iran, offering over 32 metric tonnes of supplies, including boxes filled with thousands of pairs of gloves, surgical masks, and protective tools. On 3rd March, an Air Force special plane carried a coronavirus aid mission to Iran, in collaboration with the World Health Organisation (WHO). The mission delivered 7.5 tonnes of medical stocks with five WHO experts, helping 15,000 healthcare specialists.

A United Arab Emirates aid plane carrying approximately 13 tonnes of medical supplies was dispatched to Kazakhstan, helping over 10,000 healthcare professionals. The UAE offered an extraordinary helping hand to Britain, helping local authorities to set up a field hospital in London. ExCel London events space, owned by the Abu Dhabi National Exhibitions Company, plays now a crucial role in the United Kingdom’s efforts to counter the novel coronavirus with a 4,000-bed hospital called NHS Nightingale. UAE donated 11.5 tonnes of medical equipment, including face masks, to Croatia following a devastating earthquake described as the strongest to strike the country in 140 years. The Croatian government cancelled a deal to buy protective masks worth US $2.7 million following the UAE’s donation.

Sheikh Abdullah bin Zayed Al Nahyan, UAE’s Minister of Foreign Affairs and International Cooperation, recently sent a message to US Secretary of State Mike Pompeo, reaffirming the country’s commitment to providing medical assistance for any private American citizen or member of the US armed forces, residing in the Emirates. The UAE’ technology sector also leveraged existing Artificial Intelligence and cloud computing technology, to ensure medical supplies reach the areas where they are most needed worldwide.

The Emirates offered their genuine and unconditional help to all populations in need, without considering the political orientation of their governments. UAE leadership efforts show how nations should be driven by a moral duty to help where they can. It’s the UAE spirit that makes a difference to millions of lives. By driving the global approach in fighting the novel coronavirus, the UAE disclosed all its beauty and solidarity. A model to follow by other Nations to make the world a better place for everyone.

Schools in UAE settle into the new normal - The World Reviews