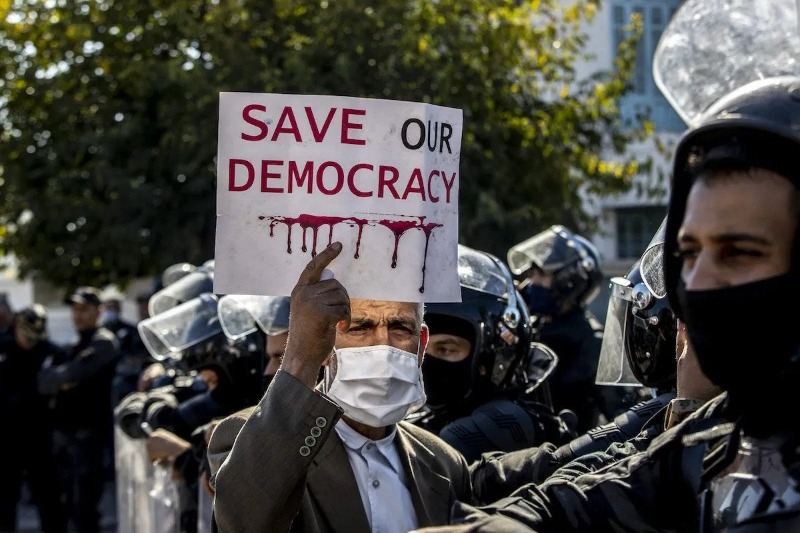 On Monday, July 25, Tunisians started voting in a referendum on a new constitution that critics of President Kais Saied believe could destroy the democracy that came from a 2011 revolution by handing him practically complete power.

On this, the first anniversary of Saied’s declaration of emergency rule and subsequent government by decree, the country will vote.

Few people were waiting in line when polls opened at 0500 GMT, but Illyes Moujahed was the first person in line at the polling location on Rue Marseilles in central Tunis because, he said, Saied was the only hope.

When I arrived in Tunisia, I vowed to prevent the country’s collapse. He said it was to “rescue it from years of corruption and failure.”

Polls shut at 2100 GMT on Saturday, and it is unclear when the results will be published, but given the lack of enthusiasm for the vote among most Tunisians and the boycott by major parties, experts predict a “yes” vote with low turnout.

According to Saied, a simple majority of voters is all that’s needed for the new constitution to be approved in the referendum. What happens if voters reject it is not specified; all that is said is that it will go into effect once the final results are released.

Saied claims that his reforms will restore the revolution and end years of political paralysis and economic stagnation in Tunisia.

His opponents say he is planning a coup.

Not united at all

However, despite the fact that nearly all major political parties and civil society organizations have condemned his unilateral approach to changing the constitution and the legality of the referendum, they have been unable to coalesce in opposition.

Protests against Saied in recent days showed signs of disunity. On Saturday, members of the Islamist Ennahda, the largest party in parliament, demonstrated. On Friday, it was held by non-governmental organizations and minor political groups. A group who supported the tyranny that existed before the revolution managed to survive both days.

While turnout was low at the protests, it has also been low at rallies hosted by Saied backers, suggesting that there is little enthusiasm for the campaign.

The majority of Tunisians’ thoughts continue to center on the country’s deteriorating economy and steadily increasing prices.

However, many people have become resentful of the parties that have governed since the revolution and disillusioned with the political system they operated as a result of the economic downturn that began in 2011.

“I don’t support Saied, but I will vote ‘yes’ in the referendum because people protesting against it are the main cause of our issues for the past decade,” said Mohammed, a resident of Tripoli.

The 2019 election for the chamber that Saied has dissolved had the lowest turnout of the three legislative elections and the two presidential elections held since the revolution, at 41%.

A turnout on Monday any lower than that rate would cast further doubt on the legitimacy of Saied’s new constitution and his goal to rebuild Tunisian politics.