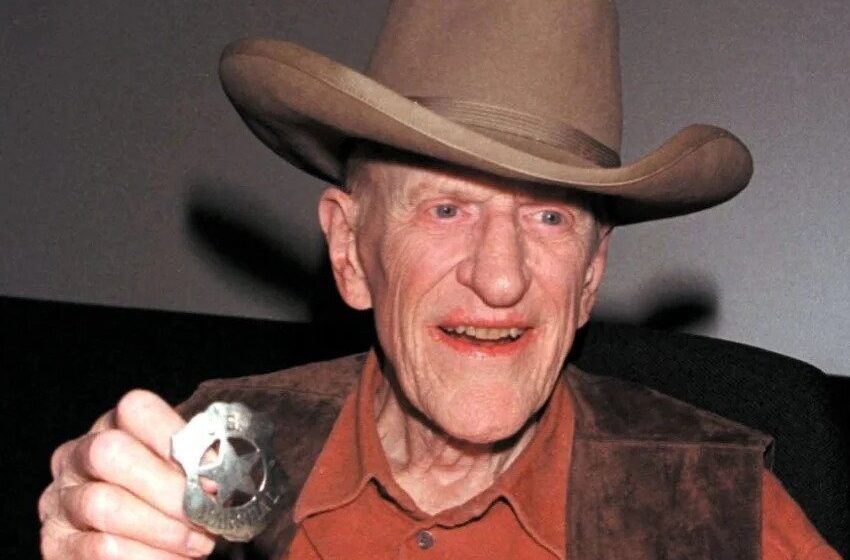 James Arness, who portrayed the tall, rugged lawman of the American frontier as Marshal Matt Dillon on “Gunsmoke,” the longest-running prime-time drama on American television, passed away on Friday at the age of 88.

Who is James Arness?

At 6 feet 7 inches, Arness was a larger-than-life actor who ably filled the boots of the mythical Dodge City lawman in the series, which was lauded for breaking TV western genre traditions with its dramatic and psychologically deep plots.

“Matt,” Arness previously stated, “is very human and has all the flaws and motivations typical of someone attempting to perform a difficult job to the best of his ability.”

In the early years of the series, Arness received three Emmy nominations. As John Wayne was on the silver screen, so was Arness on the little screen.

Years ago, David Bushman, then the television curator at what is now the Paley Center for Media in New York, told The Times, “I really believe that any pantheon of durable, well-crafted, and memorable television characters must contain James Arness. He entered the national consciousness.”

James Aurness, of Norwegian heritage, was born in Minneapolis on May 26, 1923. Three years later, his brother, future actor Peter Graves, was born.

Arness was assigned to the 3rd Infantry Division and participated in the 1944 landing at Anzio, Italy, after being drafted into the Army during his freshman year at Beloit College in Wisconsin in early 1943. (Because of his height, he was picked to be the first to assess the depth of the water after exiting the landing ship.)

Later, while walking point on a night patrol through a vineyard, Arness stumbled into a German machine-gun nest, shattering the bones in his right lower leg severely. The cut caused his leg to be shortened by approximately 5/8 of an inch, and he thereafter wore a shoe lift.

In January 1945, after months of recovery in an American hospital, Arness was honorably discharged from the Army with a $56-per-month disability pension.

On the advice of his brother, Arness enrolled at a Minneapolis radio announcing school. He promptly obtained employment as a radio DJ at a local station.

But after a few months, he quit to accompany a friend to Los Angeles. He anticipated spending a few weeks in the West before returning home.

After meeting a few contacts in the entertainment industry, he decided to stay in Los Angeles and try his hand at acting.

Using the GI Bill, he enrolled in the acting program at the Bliss-Hayden Theater in Beverly Hills, where an agent noticed him.

This resulted in his introduction to producer Dore Schary. As a result, Arness made his film debut in 1947 in “The Farmer’s Daughter” as one of Loretta Young’s three Scandinavian brothers. Small roles in “Battleground” by William Wellman, “Wagon Master” by John Ford, and other films followed.

On the set of “Gunsmoke,” Arness was known for his wit. He was fond of practical jokes and prone to wild laughter fits.

Off-set, he avoided journalists and the Hollywood scene, preferring the company of stagehands and pilots.

Since he had been a surfer since his arrival in California, he learned to fly in the late 1960s so he could reach remote surf breaks in Baja California with ease. Arness, who also skied and sailed, flew his own plane to “Gunsmoke” filming sites, and his renowned buzzing of the sets became legendary.

Following the conclusion of “Gunsmoke” in 1975, Arness portrayed a mountain man in the 1976 television film “The Macahans.” His Zeb Macahan character resurfaced in the 1977 miniseries “How the West Was Won” and the 1978-79 television series.

In 1987, he reprised his Matt Dillon role in the first of five “Gunsmoke” TV movies that continued through the mid-1990s.

The radio version of “Gunsmoke” had been a pioneering success for three years, with William Conrad supplying the authoritative voice of Matt Dillon, when CBS began searching for an actor to play in the television adaptation.

At the time, Arness, a native of Minnesota and World War II Army combat veteran, had accumulated a number of film roles, notably the extraterrestrial monster in the 1951 science-fiction classic “The Thing From Another World.” In addition, he co-starred in the 1954 science fiction thriller “Them!”

Arness acted in four films starring John Wayne while under contract with his production company: “Big Jim McLain,” “Island in the Sky,” “Hondo,” and “The Sea Chase.”

Fearing that acting in a television series would harm his burgeoning film career, Arness grudgingly consented to audition for the role of Dillon; he was the last of a large number of actors who tried out for the position.

When CBS offered Arness the role, he hesitated before signing the contract. But Wayne persuaded him to accept the post, stating that it was an incredible opportunity.

To give Arness and “Gunsmoke” a public relations boost when it first aired, Wayne offered an on-camera introduction in which he lauded the new television western series for being truthful, mature, and realistic.

Wayne told the audience, “I knew there was only one man who could play the role, and that was James Arness. He is a young man who may be unfamiliar to some of you. But having worked with him, I anticipate he will become a major celebrity. Therefore, you should become used to him, just like you had to get used to me.”

Arness became a welcome guest in the homes of millions of viewers, as did the show’s supporting cast: Dennis Weaver as Dillon’s stiff-legged deputy, Chester Goode; Amanda Blake as Kitty Russell, the proprietor of the Long Branch Saloon; and Milburn Stone as the wise, weathered Doc Adams.

Boyd Magers, the editor and publisher of the western cinema publication Western Clippings, ascribed the show’s ongoing success to its solid script, direction, and ensemble cast. Indeed, the spotlight was frequently on the numerous regular characters and guest stars of the show.

“Arness in particular said, ‘Let’s get that off of me,'” Magers told The Times many decades ago. “He lacked this star complex. He gave the other individuals the episode to themselves. As a result, you did not tire of any one character, and they were all terrific, well-rounded personalities due to the quality of the writing.”

The press viewed Arness as a reluctant interview subject due to his intrinsic shyness, which he claimed was formed by his childhood self-consciousness over his height.

How did James Arness die?

Ginny Fazer, who managed Arness’s business affairs, revealed that the actor passed away from natural causes at his home in Los Angeles.