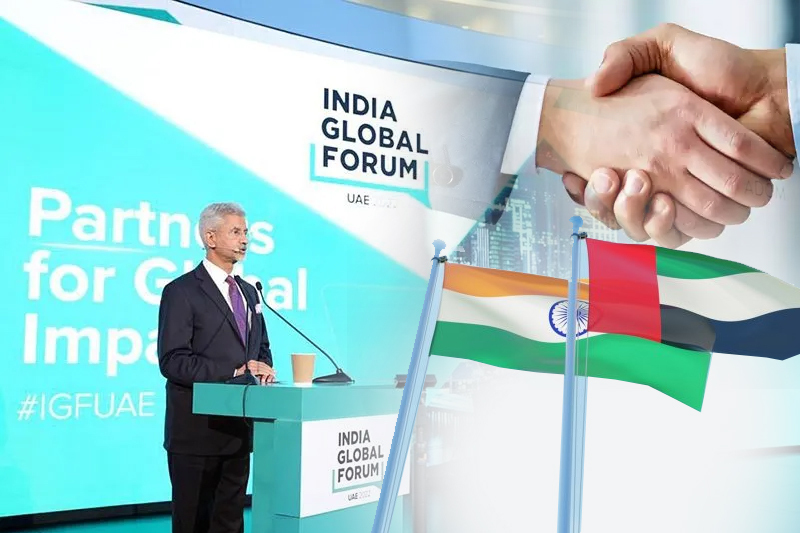 At the opening of the India Global Forum UAE 2022, India’s external affairs minister, S. Jaishankar, declared that India and the UAE would play a vital role in altering the world order. According to Jaishankar, the ancient civilizations of India and the Gulf state have coexisted for many years and are currently rekindling their connections.

Also Read – Cop27: What is the UAE led Mangrove Alliance for Climate with India as latest addition?

According to Jaishankar, India and the UAE are participating significantly in Middle Eastern geopolitics through their membership in the I2U2 group, in addition to their rising bilateral trade and expanding economic share of the world. As yet another illustration of how the enhanced ties between India and the UAE are having a wider influence, I would refer to the creation of the I2U2 mechanism, which comprises India, Israel, the UAE, and the US. Jaishankar noted that it is often helping to further transformations that are taking place separately in this area and that it fits within.

Therefore, the image I have of India and the UAE today is one of two countries that have long been acquainted but have just recently rediscovered their bond. He continued by saying that we still use our relationships to adapt to and survive in a changing world. The minister added that the Indian government places a high priority on relations with the UAE, noting that the two countries have recently increased their level of economic cooperation.

India’s third-largest commercial partner now is the United Arab Emirates. It is the second-largest export market for us. Of all nations in the globe, the UAE has the greatest number of Indian residents. So, whether we are discussing individuals or business, the UAE has special importance in our minds, he claimed. Since PM Modi’s visit in 2015—which occurred after more than four decades—we have witnessed a genuine improvement in our relationships. As I already mentioned, our trade and investment have expanded, Jaishankar remarked.

The relationship between India and the United Arab Emirates is a logical illustration of the return of history in this region of the world. We occasionally hold a different perspective. Even that, he said, is frequently stated quietly between us. He places the India-UAE relationship very high among the relationships that will resurface as history returns and in the days to come. The world’s top political, business, and cultural luminaries will congregate for the five-day gala event known as the India Global Forum UAE 2022.