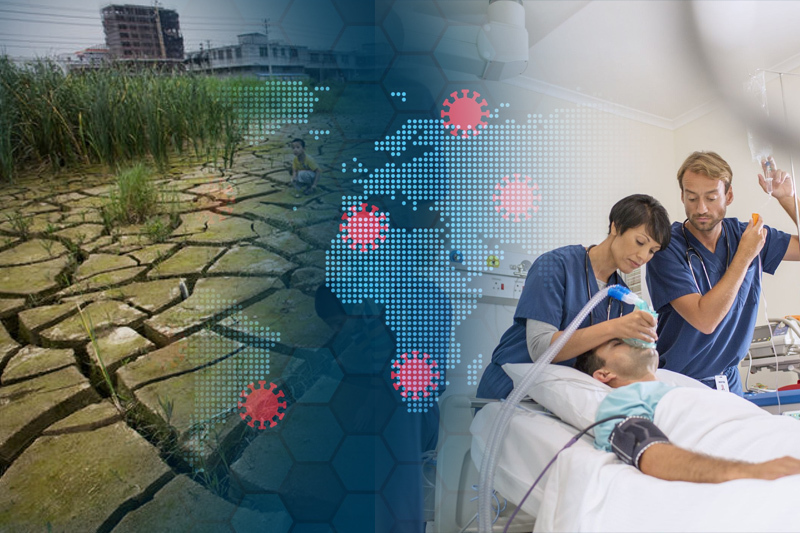 An expansive study has recently cracked a link between climate change hazards and disease patterns in humans globally. The study has found that over half of the diseases globally caused by pathogens have at some point ‘worsened’ by impacts associated with climate crisis. The research has found that diseases such as zika, malaria, dengue, chikungunya and even Covid-19 have been aggravated by impacts of climate changes like heatwaves, wildfires, extreme rainfall and floods.

The researchers have found that “there are more than 1,000 different pathways for these various impacts to worsen the spread of disease, a cavalcade of threats too numerous for comprehensive societal adaptations”.

Talking about the diseases spread by vectors like ticks, fleas and mosquitos – malaria, Lyme disease, West Nile virus, among others – the changed rainfall patterns as well as global heating has played a big role in expanding the distribution of these diseases. Displaced people due to flooding and storms have led to higher concentration of people, thereby increasing the outbreaks of cholera and gastroenteritis. The poor sanitation at closed spaces of displaced people is also leading to high instances of typhoid, dysentery and other diseases.

“We are opening a Pandora’s Box of disease,” said Camilo Mora, a geographer at the University of Hawaii who led the research. “Because of climate change, we have all these triggers all over the world, over 1,000 of them. There are diseases out there just waiting to be unleashed. It’s like we are poking a stick at a lion – at some point the lion will come and bite us in the ass.”

The World Health Organization has further warned that the climate crisis “threatens to undo the last 50 years of progress in development, global health, and poverty reduction”. The UN health organization has estimated that an “additional 250,000 people will die each year from 2030 to 2050 due to proliferating diseases such as malaria and diarrhea, as well as malnutrition and heat stress”.

Aaron Bernstein, director of the center for climate, health, and the global environment at Harvard University noted lauding the remarkable study, that climate changes rendering some parts to be too hot or too cold, while others to be too wet or dry due to flooding, droughts make the living conditions for people too unsustainable for living.