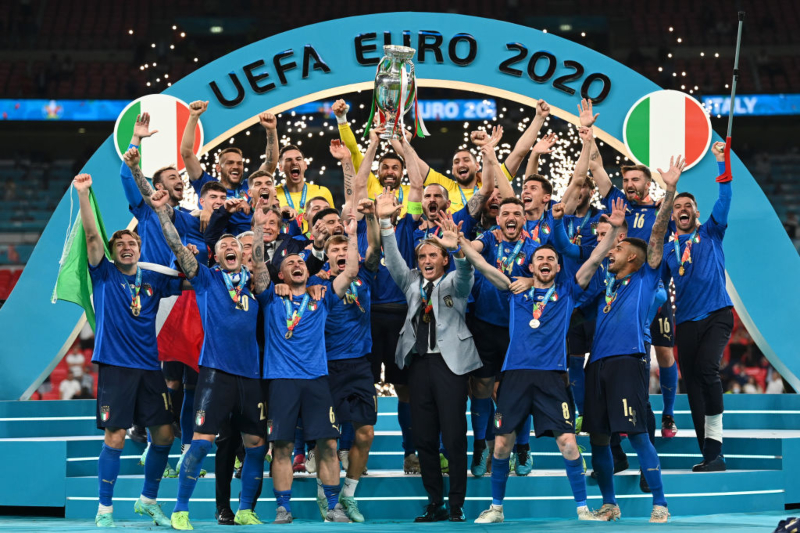 Historic victory for Italy, the Azzurri European champions after 53 years

After the penalty saved by Donnarumma in Saka, Italy became the European champion, and the Azzurri were able to start the party in all Italian squares. From Rome to Milan, from Naples to the rest of the country, fans waved the flag for the whole night. Italy had been waiting for joy since 2006, the year of the World Cup victory in Germany. But, on the other hand, success at the Europeans had been missing for 53 years.

The first country to win Eurovision and the men’s European Championships in the same year! 👏🤩👏 pic.twitter.com/lfSlYzIwJt

Matteo Berrettini lived a special day in his way. First, the Wimbledon final lost to Novak Djokovic, then the 120, and spent minutes at Wembley for the European Championships between Italy and England. Then, after Azzurri’s party, he took the field to cheer with the team and was entertained, particularly with Gigio Donnarumma, the man of the match.

The night was tinged with the tricolor in London after Italy’s triumph at Euro 2020, in the literal sense of the term. The legendary Wembley arch pays homage to the victory of the Azzurri with the colors of our flag to illuminate the sky of the English capital. London’s gray sky has turned blue. “It’s coming to Rome. The Cup is coming to Italy.” We are waiting for it with open arms. A fairy tale, the European Championship won after the one in 1968. A crazy ride, from the lack of qualification for the World Cup, the lowest point, to the triumph at Wembley.

👑 The Champions of Europe have arrived back in #Rome 🇪🇺#VivoAzzurro #EURO2020 pic.twitter.com/ZmDqUEhhya

England bows, after Spain and Belgium, to this Italy. And Mancini finally releases the tension by bursting into tears: he deserves it. This Cup is above all his. He has created an incredible group, united and powerful, who showed the best football of these European Championships, even without having so many great champions in the team. It started very badly, with Shaw’s goal in the first action. It ended as we all dreamed of—Hero Donnarumma, who saved two penalties, in addition to the Rashford pole.

For Italy, Belotti and Jorginho were wrong, but those made by Berardi, Bernardeschi, and Bonucci were enough. England is defeated, once again: with Italy, they have never won in a big international competition. He has pers or even in her house this time, with sixty thousand fans pushing her to Wembley. The Cup goes to Rome with the Azzurri and Mattarella, who suffered and rejoiced in the stands. Mancini did not change anything, the same formation that beat Spain in the semifinals, with Emerson Palmieri replacing the injured Spinazzola.