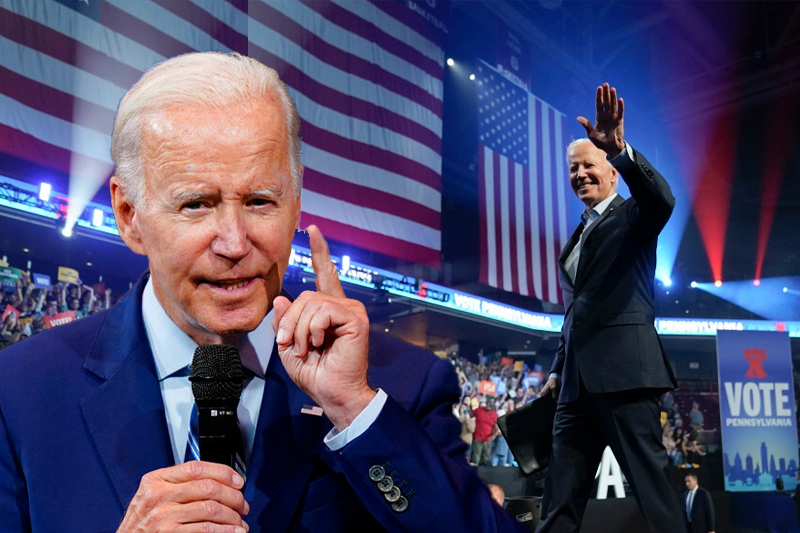 There have been widespread concerns around the fate of Democrats in upcoming crucial midterm elections. This made final speech by President Joe Biden to voters even more significant. Rallying with fellow Democrats on Monday night, US President delivered a speech that was shining with hopes of a better tomorrow and determination to make that powerful impact and changes if the American voters supported the Democrats in mid term elections.

“Our lifetimes are going to be shaped by what happens the next year to three years,” Biden said as he addressed enthusiastic crowd in Maryland. “It’s going to shape what the next couple decades look like”, he added stressing enough on the crucial elections and how the mid term is going to determine which party will be in control of the US Congress for the next two years.

President Biden reiterated the critical abortion rights and assured to shore the rights if Democrats are able to get majority in Congress. However, recent polls have showed that voters are more concerned about the economy, an agenda that is traditionally a forte of Republicans. Many Democrats too have raised concerns that the candidates haven’t done enough to address the voters’ concerns regarding economic state of country, which might leave the party in a vulnerable state.

While the country stares at record inflation and fears of recession, President Biden showed the voters different numbers – low unemployment rates in the country. He pointed out that 10 million jobs had been created since he took the office, a fair good point to address unemployment issue among American voters and to defend the issue of economy. “Remember, these are the guys who passed the $2tn tax cut benefitting the wealthy and big corporations and didn’t pay for a penny of it,” Biden said, referring to the 2017 Tax Cuts and Jobs Act that Trump signed into law. “We’re the ones bringing down the deficit, allowing us to afford to provide ordinary, hardworking Americans a little break.”

Though he raised concerns about the series of threats being faced by the country, President Biden ended his speech on a hopeful and positive note. “As I travel this country and the world, I see [a] great nation because I know we’re a good people,” Biden said. “We just have to remember who in the hell we are.” This is, in high probability, enough to tap on the fact that Biden administration is here to address the challenges in store and tackle them head on if they get the majority in US Congress.