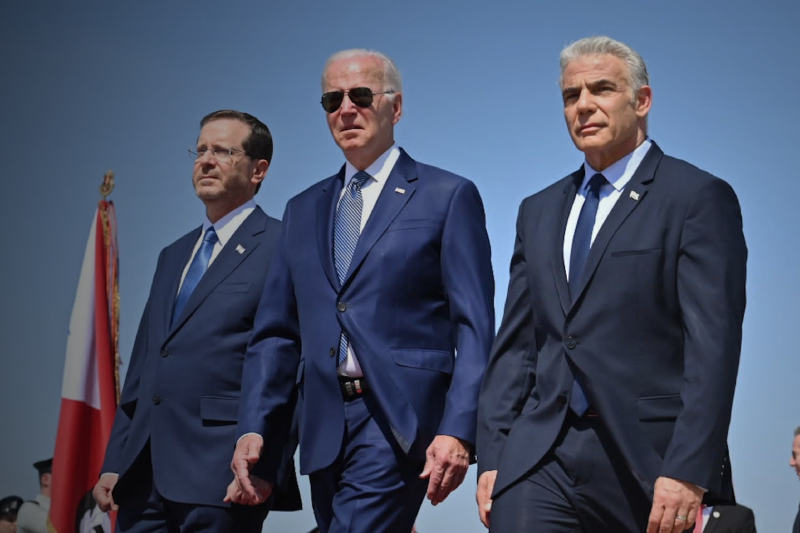 United States President Joe Biden has reached Israel, the first lap of his trip to Middle East before he heads to Saudi Arabia. On Thursday, Biden and Israeli Prime Minister Yair Lapid are expected to sign a new joint declaration that is aimed to expand the security ties between countries and counter the aggressive efforts by Iran to destabilise the peace and security in the region.

Soon after landing in Tel Aviv on Wednesday, President Biden reiterated his support for “two-state solution”. He said, “That remains, in my view, the best way to ensure the future of equal measure of freedom, prosperity, and democracy for Israelis and Palestinians alike.”

A US official said that the new declaration to be signed between Biden and Lapid includes “a commitment to never allow Iran to acquire a nuclear weapon.” This comes as Biden administration is working ‘desperately’ to revive the Iran nuclear deal that the US had exited from under former US president Donald Trump in 2018. The deal, also called JCPOA (Joint Comprehensive Plan of Action) was formulated in 2015 under then US president Barack Obama and VP Joe Biden.

The declaration is said to further support and reiterate the strength of Trump-era Abraham Accords, that led to normalization of relations between Israel and many Arab countries. It will also encompass the expanding Israel’s integration into the region, which is a major theme of President Biden’s four days long trip to the Middle East.

The visit to Israel includes shared concerns of the two leaders – global food insecurity and supporting Ukraine as Russia continues to invade the country.

In his meeting with Israeli PM Lapid, officials say that President Biden is expected to “reiterate the US’ ‘ironclad’ support for Israel’s security and discuss working toward a two-state solution to the Israeli-Palestinian conflict”.

Biden is also expected to meet former Israeli PM Benjamin Netanyahu. “They, of course, go back many years and know each other well. And we are clear during this visit that the relationship between the United States and Israel is about the countries, our strategic partnership as two states — not about individual leaders,” one official said.