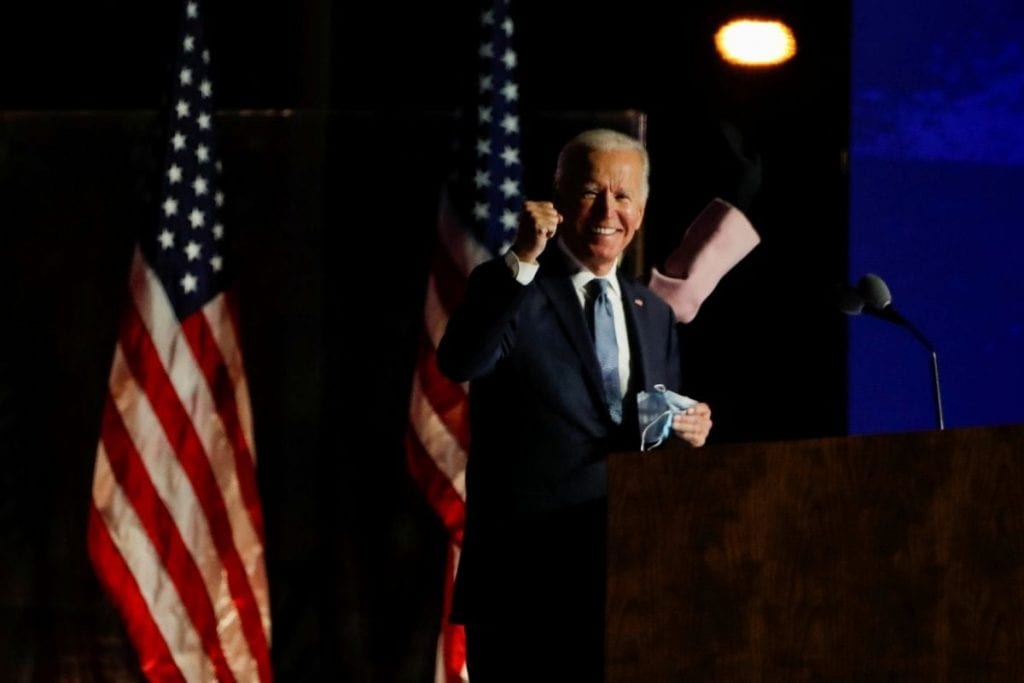 Joe Biden is nearing the 270 electoral votes mark to win the US Presidential Election and become the 46th President of the United States of America. He is leading and is just a step away from the win, standing strong with 264 electoral votes. The game-changing win in Michigan and Wisconsin on Wednesday has paved the way for his clear victory. These were the states in which Biden registered a flip victory, which Trump had won in the 2016 elections. President Trump is standing with 214 electoral votes.

Nevada is one of the states whose results are awaited with Biden leading with 49.3% votes and Trump is trailing closely at 48.7%. The race is close and can be one of the deciding factors for Biden’s win. The state has 6 electoral votes – the exact number for Biden to hit the 270 mark. If Nevada turns blue, Biden is getting his entry into the White House.

The experts are however calling the presidential race too close to call a win for Biden.

Pennsylvania’s results are still awaited, with 20 electoral college votes the state has quite a weightage. Trump is leading with 50.7% votes and Biden has 48.1%. Still, 11% of votes are left to be counted, and that can turn the tables. If Trump wins the Penn state, he can be back in the race.

Arizona was called as a win for Biden on Wednesday, another flip victory for the former VP. But mail-in ballot counting in Arizona is still ongoing, with many large counties still awaiting the final tally. The state with 11 electoral college votes, is largely Republican, which was last voted Democratic in 1996. But with increased Hispanic electorate
share, this is critical for Biden and also Trump.

Why the confusion? Could it have been avoided?
The massive confusion, anxiety, and agitation could have been avoided which the country is facing for the past two days over election results. The drawn-out ballot counting in Pennsylvania, Michigan, and Wisconsin are not due to close race but are artificially developed due to counting left for the last minute. Long votes counting is a form of voter suppression, largely a result of stringent rules imposed in Republican-controlled states. This made Wisconsin and Pennsylvania barred from any early processing of mail-in ballots. Citing pandemic this should have been allowed. Michigan was allowed only one day for early votes processing. The problem was expected along with Trump being expected to take advantage of delayed counting and uncertainty ensued with attempts to steal election through false claims.

What does the Constitution say regarding votes counting? How long do the states have to count the votes?
President Trump had falsely tried to declare his victory on the election night. He has been constantly challenging the credibility of the country’s election process and claiming conspiracies against him. Well, none of that is actually true. As opposed to what Trump says, the results are not to be declared on the night of the election. Constitution and federal laws have clear guidelines for this.

On Election Day (November 3): Millions of people cast their votes weeks into the election day through either mail-in ballot or as in-person absentee voter. Federal law says that the election day occurs on the first Tuesday after November’s first Monday. Though winners are projected, there is still scope for changed results due to continuing main-in ballot counting.

November 10 to December 11: States clarify and confirm the results.

December 8: By this date, all states must have counted votes, settled any disputes and determine the electoral college winner.

January 3: Members of the House and Senate members get sworn in. This will mark the 117 th Congress commencement.

January 6: New House and Senate members read out the electoral votes in the House of Chamber and counted. The session is presided by the Senate President.

January 20: Day when newly elected President takes an oath in his office.

The stress and apprehension around US Presidential Elections are too high. The race is too close and still can sway either side. But the only hope is that the whole process proceeds with democratic stability intact and gracious acceptance by the contenders of the result.