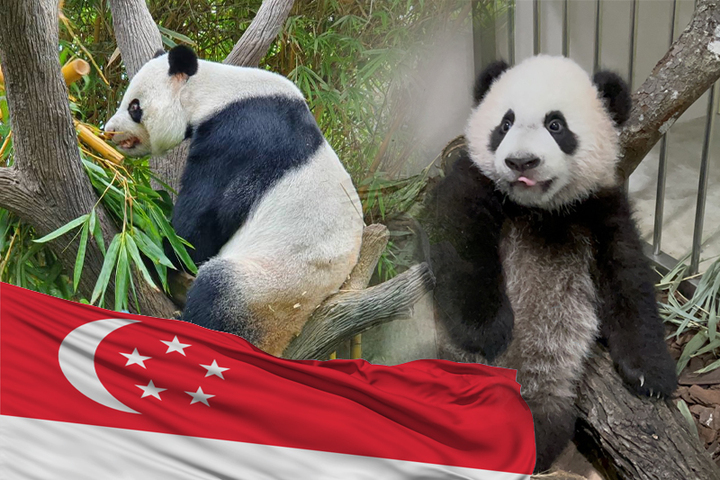 We will soon be celebrating the birthday of a local star; on Sunday (August 14), Le Le, the first giant panda cub born in Singapore, will become one year old.

The celebrations for Le Le’s birthday have already begun at the River Wonders’ Giant Panda Forest exhibit, which is where he currently resides. On Friday morning, his caregivers gave him and his mother Jia Jia a three-tiered ice cake decorated with carrots, bamboo, and edible flowers, and topped with apple slices. The cake was presented to them both by Jia Jia.

Although he is still mostly dependent on his mother’s milk, Le Le has started to develop a taste for solid food. According to his care team, he has been nibbling on pellets and carrots, in addition to eating bamboo leaves and shoots in very little quantities.

Another important step in Le Le’s development was taken not too long ago. Last month, his caretakers started him on a journey known as positive reinforcement training (PRT). Le Le is almost too cute to bear. It has been suggested that these sessions serve as practice for normal medical treatments that will take place in the not-too-distant future in order to simplify overall animal care and health monitoring.

In the instance of Le Le, his caregivers are beginning by attempting to get him to respond to a target. When he successfully completes the behavior, he is rewarded with a treat, which may take the form of a little piece of carrot or a pellet.

However, just like any other small child, Le Le is still easily distracted, which means that her training sessions only last for a few minutes at a time for the time being.

When Le Le was born on August 14, 2021, he generated quite a panda-monium. His parents, Kai Kai and Jia Jia, were the two giant pandas that had been loaned to Singapore from China for a period of ten years beginning in 2012. He is the first panda to be considered to have been “born” in Singapore because he was conceived through artificial insemination.

The stupendous birthday celebrations for Le Le will continue into the weekend; guests who would like to see him playing with his ice cake at Giant Panda Forest on August 14 at 10 a.m. will have the opportunity to do so.