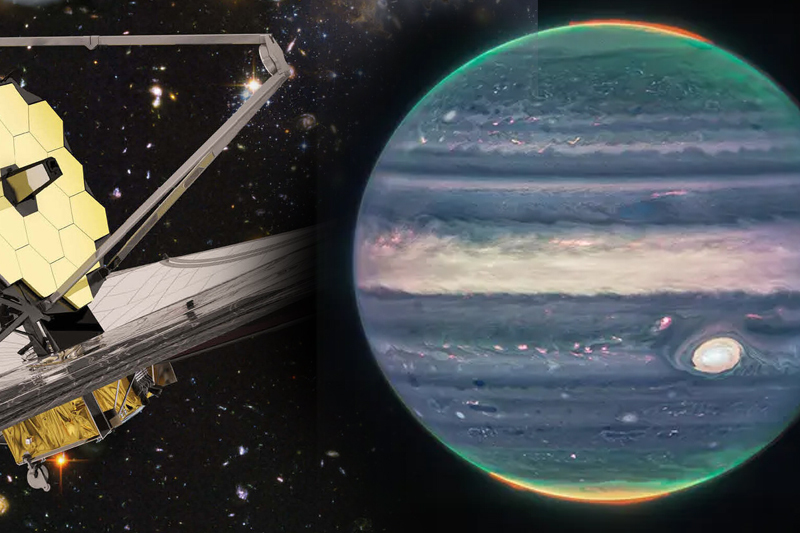 Jupiter like never before: Incredible view by James Webb telescope

Rainbow auroras, giant storms and far-off galaxies are all seen in the latest images of Jupiter released on Monday from NASA’s James Webb Space Telescope, the latest and biggest telescope of the world. “We hadn’t really expected it to be this good, to be honest,” said planetary astronomer Imke de Pater, professor emerita at the University of California, Berkeley, in a news release. “We’ve never seen Jupiter like this. It’s all quite incredible.”

De Pater and Thierry Fouchet, a professor at the Paris Observatory, led the observations of Jupiter, the largest planet in our solar system using the James Webb telescope, an international endeavor by NASA with the European Space Agency and Canadian Space Agency. NASA and the European Space Agency’s $10bn successor to the Hubble space telescope rocketed away end of last year and has been observing the cosmos in the infrared since summer.

The images offer a magnificent view with colors moving from orange and yellow at the largest planet’s poles to blues and purples toward its center. Multiple images released from the telescope amalgamate to form a composite picture of the gas giant planet. “You can also see faint rings and far off galaxies ‘photobombing’ in the background,” according to NASA. “And Jupiter’s famous Great Red Spot – a storm big enough to engulf Earth – appears white in these images.”

NASA said that the scientists have collaborated with citizen scientist Judy Schmidt to translate data to form the composite images from the telescope, to offer a better look into Jupiter. Schmidt says that it is hard to draw a clear picture on planet simply because of how quickly it rotates.