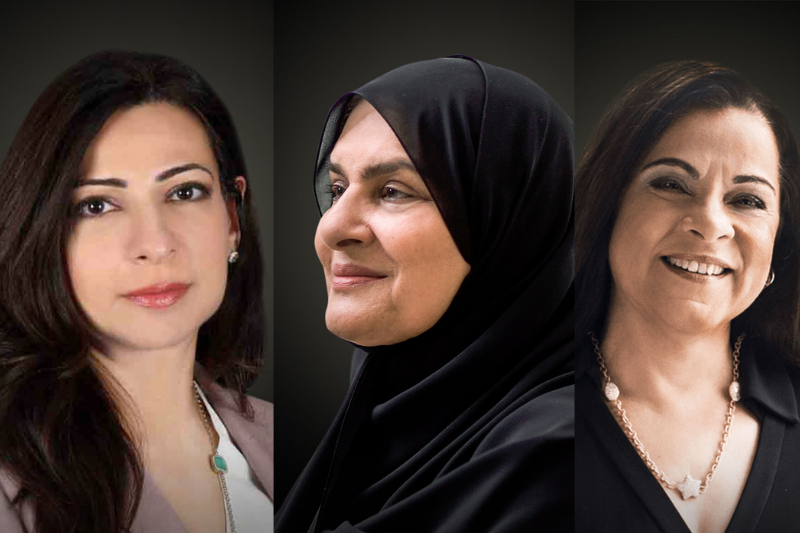 This year’s list of MENA’s most powerful and successful businesswomen includes women from 19 different countries and 17 different industries. The United Arab Emirates and Egypt received the most entries, each with seven, followed by Saudi Arabia, Morocco, Kuwait, and Oman, each with four.

The banking and financial services industry has the most entries (16), followed by diversified conglomerates and the retail sector, each with six, and technology with five.

Let’s take a loot at the top 10 powerful Arab Businesswomen of 2023.

Raja is the managing director and vice chairman of the Easa Saleh Al Gurg Group, one of the Middle East’s largest corporations. The company is made up of 27 different businesses, ranging from retail to construction to a metal foundry. Al Gurg also serves as the head of the Dubai Business Women Council, which promotes female entrepreneurship in the United Arab Emirates.

Jagtiani is the chairwoman and CEO of Landmark Group, a global consumer conglomerate created by her husband Micky Jagtiani and based in Dubai.

She has been in charge of the company’s business strategy and expansion into new markets for more than 20 years. Jigtiani is the CEO of a corporation with approximately 50,000 people.

In 2020, the banking group’s total assets were $250 billion, with a net profit of $2.9 billion. It agreed to buy the Egyptian unit of Lebanon’s Bank Audi in 2021. Al Rostamani was FAB’s deputy CEO and Group head of personal banking before being named CEO.

She is a board member of the AW Rostamani Group, chairperson of FAB Private Bank Suisse, and a member of MasterCard Advisory, with over 22 years of expertise in financial services.

Since March 2014, Al Suhaimi has been the CEO of NCB Capital and a member of the company’s Board of Directors. Since then, she has been instrumental in reorganising NCB Capital, resulting in increased growth, product creation, and significant technology advancements for the company and its clients. She is a Harvard University and King Saud University graduate.

She is in charge of bolstering the legal framework for the development of capital markets in the United Arab Emirates, including the Dubai Financial Market, Abu Dhabi Stock Exchange, and Dubai Gold and Commodities Exchange.

The University of Leeds awarded Al-Suwaidi a Ph.D. in law. Al-Suwaidi was named the first Emirati female assessor expert in fighting money laundering and terrorism financing by the Financial Action Task Force in September 2021.

Hutham Olayan, a Saudi entrepreneur, is the chairman, director, and senior executive of the Olayan Group.

Suleiman Olayan launched the company in 1947 as a Saudi haulage, contracting, and trading company, and it has since grown to more than 50 firms with offices all over the world.

Since 1985, Olayan has led the group’s US operations, serving as president and CEO of Olayan America and its US affiliates.

Since February 2022, Jordanian entrepreneur Randa Muhammed Sadik has served as CEO of Arab Bank. She previously served as deputy CEO for over ten years.

Sadik has more than 36 years of banking experience, including 24 years with Kuwait’s National Bank, where she held numerous management positions, including general manager of the international banking group.

She graduated from the American University of Beirut with an MBA. Sadik was named one of the Middle East’s 50 most powerful businesswomen by Forbes Middle East.

Sheikha Hanadi Al Thani was born in Qatar and graduated from Qatar University with a bachelor’s degree in economics.

She then went on to London Business School for an executive MBA and the University of London for a master’s degree in economics.

She began her career as a lecturer’s assistant in Qatar University’s Economics Department before establishing the Qatar Ladies Investment Company, the first regulated investment company to be granted a licence by the Qatar Central Bank, allowing it to conduct investment banking and asset and wealth management. Later, the corporation was called Amwal.

Since 2016, Nezha Hayat has served as President of Morocco’s Capital Markets Authority. The Moroccan Markets have a market capitalization of almost $65 billion, and most of the country’s leading enterprises are listed there.

Hayat began her career in Spain at Banco Atlantico’s international business, where she was in charge of foreign risks and debt restructuring.

She is one of the founding members and president of Club des Femmes Administrateurs d’Entreprises en Maroc (CFA Maroc), a non-profit organisation dedicated to increasing the representation of women on boards of directors of public and private firms.

Al-Bahar is also the vice chairman of Watani Investment Company KSCC and a director of Mobile Telecommunications Company KSC. She is also a member of the International Bank of Qatar’s board of directors. Kuwait’s Supreme Council for Planning and Development includes her. Al Asima Real Estate’s Chairman was Al-Bahar.