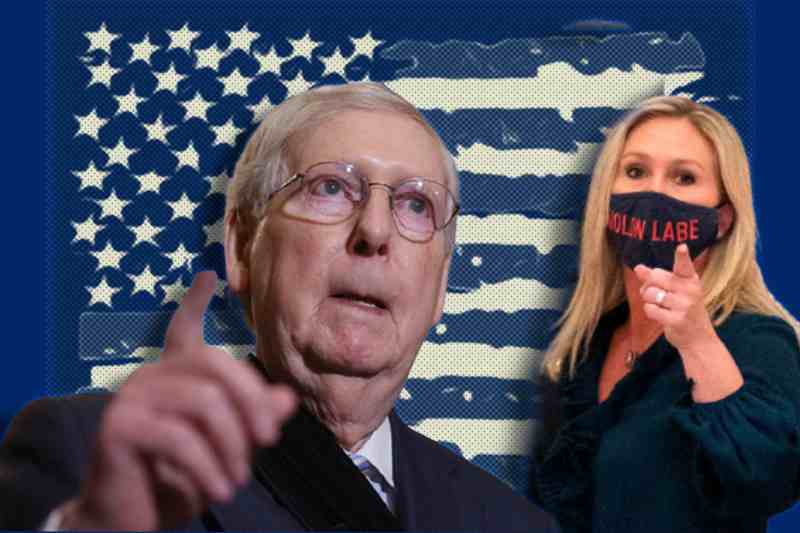 Senate Republican leader Mitch McConnell has called Georgia’s congresswoman a ‘cancer for the Republican party’ for endorsing in ‘loony lies and conspiracy theories’. McConnell did not directly name Marjorie Taylor Greene on a Monday night to The Hill but his attack was targeted to the new Congresswoman who is a strong Donald Trump supporter.

Greene’s open support to racist conspiracy theory group QAnon and other extremist groups is causing turmoil and friction among Republicans across Congress. The intervention by McConnell raises the debate of what to do with Greene. House Democrats have made it clear that in case House Minority leader Kevin McCarthy fails to expel Greene from various congressional committees, they are prepared to do so.

McConnell said, “Somebody who’s suggested that perhaps no airplane hit the Pentagon on 9/11, that horrifying school shootings were pre-staged, and that the Clintons crashed JFK Jr’s airplane is not living in reality.” He added, “Loony lies and conspiracy theories are cancer for the Republican Party and our country.”

Greene didn’t waste any time in responding and fired back a tweet saying “Real cancer for the Republican party is weak Republicans who only know how to lose gracefully.”

Last week sensational videos were released of Greene’s controversial statements on multiple incidents, just a week into her arrival in Congress. Her bizarre stand on array of subjects is rather offensive and has invited calls for censuring her. In 2019 Greene was filmed for harassing Parkland school shooting survivor David Hogg, wherein she called the shooting ‘staged’ and claimed it to be ‘false flag’ act of make believe.

Furthermore, her Facebook posts were reviewed by CNN that showed her open support to idea of executing key Democratic leaders like Nancy Pelosi, Barack Obama and Hillary Clinton.

McConnell, for past few weeks, is seen treading a delicate walk between pro-Trump and post-Trump camps within the Republican party. Regarding his support to Trump’s impeachment trial too McConnell has suggested he is open to convicting Trump but has also voted along with other Republicans in Senate to dismiss the trial case.