Home » Abraham historic agreement signed at the White House, UAE and Israel for peace in the Middle East
By    Staff Writer      September 15, 2020 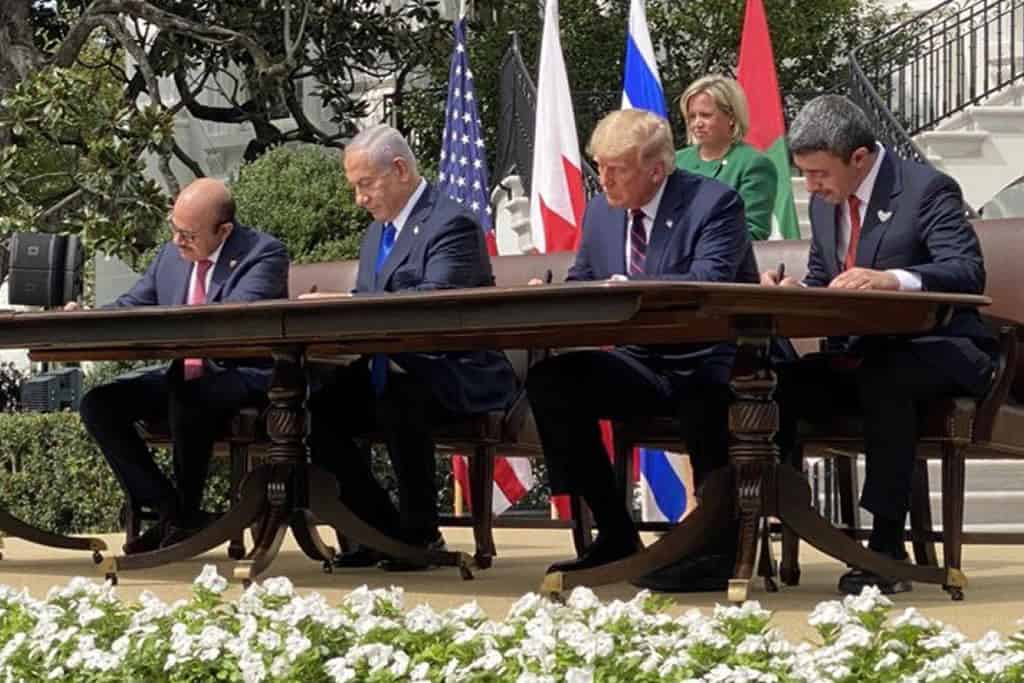 Abraham historic agreement signed at the White House, UAE and Israel for peace in the Middle East

The White House hosted Tuesday the signing ceremony of the peace agreement between the Emirates and Israel, the beginning of a new era for the Middle East.Bahrain’s Foreign Minister also attended the ceremony and signed a separate peace declaration with Israel. The President of the United States, Donald Trump, and the first lady, Melania Trump, held the ceremony in the garden of the White House. The Abraham Accord has been reached by Israel and the UAE after almost eighteen months of talks. President Trump opened the event by saying the signing of the accord marks the dawn of a new Middle East.

“Thanks to the great courage of the leaders of these three countries, we take a major stride toward a future in which people of all faiths and background live together in peace and prosperity,” Trump affirmed. He also stressed that these agreements will serve as the foundation for a comprehensive peace across the entire region, indicating that Muslims around the worldcan now pray at Jerusalem’s Al Aqsa Mosque. From his side, Israeli Prime Minister Benjamin Netanyahu stated that the US president has the key to the hearts of the people of Israel, anticipating that – thanks to the United Arab Emirates -five additional countries want to establish relations with Tel Aviv. Netanyahu revealed that discussions were already underway.

UAE Foreign Minister Sheikh Abdullah bin Zayed began his address before the signing of the Abraham Accord, by saying “Assalam Alaykum.”Sheikh Abdullah thanked Netanyahu for choosing peace and halting the annexation of Palestinian territories, stressing that “anything other than peace means destruction, poverty and human suffering. This is not a slogan for political gain, as everyone looks forward to a more prosperous and secure future.”As part of the agreement, announced on August 13, Israel agreed to suspend its plan to annex the Palestinian territories in the West Bank to have balanced relations with the Arab country. “We want to show our people, the region, and the world that there is good news,” said Sheikh Abdullah indicating that the Middle East has suffered far too long.

The deal sends a powerful signal that the UAE has regained control of its decision-making process and assessed its interests in a way that surprised both partners and enemies, Omar Ghobash, Deputy Minister of Affairs, said in an online forum yesterday. Ghobash indicated the UAE had in the past outsourced their relations with Israel, but that has changed. “We are a state that respects its sovereignty,” said the diplomat, part of the high-level delegation accompanying Sheikh Abdullah for the historical ceremony.

The Emirates has played a vital role in peace in the Middle East. Stopping Israel’s annexation plans means relaunching the process of dialogue and better living conditions for Palestinians, instilling hope in millions of young Arabs for a future of peace after years of tragedies, deaths, and wars. Sheikh Mohammed bin Zayed’s initiative to reach a peace agreement with Israel, interrupting the annexation of the Palestinian territories, has provided more time for peace opportunities that could be achieved through a two-state solution. Neighboring countries have always asked for Abu Dhabi to intervene to find a solution to the project of annexation of the Palestinian territories, and this is what they have done, putting an end to this conflict that has lasted more than sixty years.

Thanks to the UAE diplomacy, Bahrain has also agreed to normalize ties with Israel, in a decision announced earlier this month.Today, the small Gulf state also signeditspeace declaration.Bahrain’s Foreign Minister Dr Abdullatif Al Zayani described the Abraham accord as a “moment of hope and opportunity for all the people of the Middle East, and in particular for the millions in our younger generations”. Thanking the UAE and Sheikh Mohammed Bin Zayed for its leadership in the peace agreements, he said that the deal will enhance Bahrain’s principles of coexistence and harmony as genuine co-operation is the most effective means to peace.

Bahrain and the United Arab Emirates have not fought wars with Israel, unlike Egypt and Jordan, which signed peace treaties with Tel Aviv in 1979 and 1994, respectively. The Abraham Accord represents the beginning of a new era, it will unite diplomatic with economic peace and pump billions into the economies of the three countries through investment, cooperation, and joint ventures. The deal came in a joint call between Sheikh Mohamed bin Zayed, Crown Prince of Abu Dhabi and Deputy Supreme Commander of the Armed Forces, Trump and Netanyahu.

Related News: Abraham Accord: How the UAE-Israel Peace Agreement is first step towards geopolitics normalization in the region

EU’s differences with China over trade, human rights and democracy make it shift towards Indo-Pacific region
Community refugee camp and pact for migrants: will the EU start from here to find unity on refugees?
Subscribe
Login
0 Comments
Inline Feedbacks
View all comments