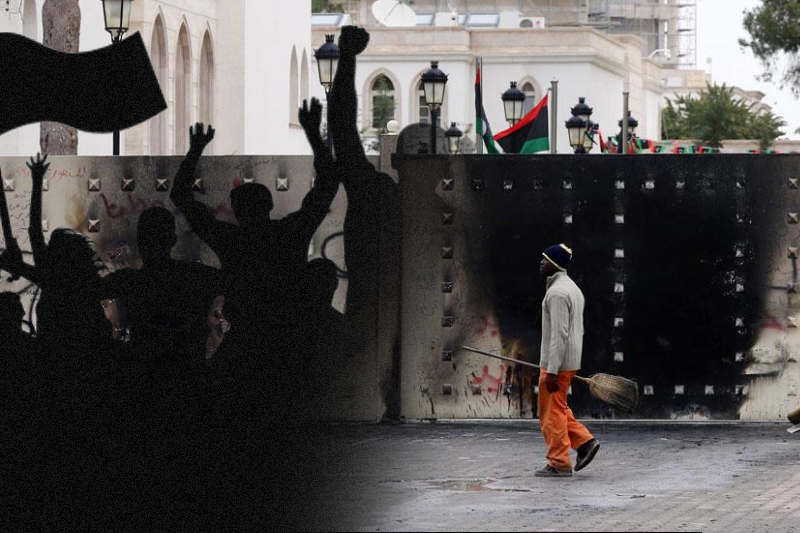 Libyan media has reported that protesters on Friday stormed the country’s parliament building located in the eastern city of Tobruk. The people in Libya are demonstrating against the continued political deadlock in the country as they suffer under rapidly deteriorating living conditions and degrading economy.

Storming inside the Parliament building

Many television news channels on Friday reported that the protesters in Libya had managed to ‘penetrate’ the Libyan Parliament building in Tobruk and vandalized the federal building.

Soon there were videos showing thick black smoke coming out from the parliament perimeter as the angry and frustrated protesters burned tyres. Some media reports also mentioned that a part of the building had been set on fire by the protesters.

Friday being the start of weekend in Libya, the parliament building was empty and so no casualties took place.

Demanding for their rights

Protesters chanted, “We want the lights to work”.

Libya has been struggling with chaotic economy that has made it a fight for people in country to avail basic essentials. Frequent power outages are further making the lives difficult for people. Electricity supply has been impacted due to blockade of many oil facilities in the country amid political rivalries.

Lawmaker Balkheir Alshaab told Libyan channel Al-Ahrar, “We must recognise our failure and immediately withdraw from the political scene”.

Earlier on Friday, other cities also witnessed demonstrations, al-Wasat reported. In the capital city of Tripoli located in the west of the country, hundreds of people gathered in a central square, protesting against armed militias while demanding “lower bread prices and better electricity supply”.

Libyan news website al-Wasat reported that the “protesters in Tobruk were demanding the dissolution of parliament and new elections. At the same time, the protests were also directed against the poor living conditions in the country”. In the capital Tripoli, demonstrators have also called for elections after the failed elections in December led to political chaos in Libya.