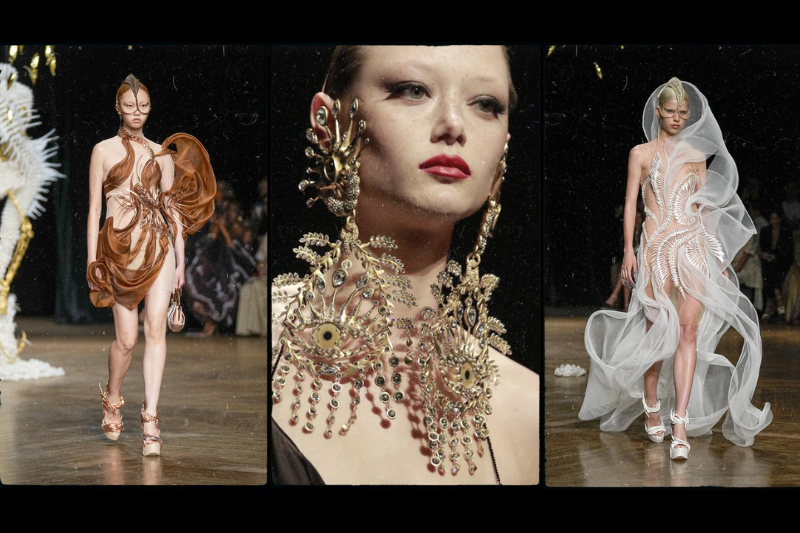 Dior’s creative director Maria Grazia Chiuri has found her answer to the real meaning of haute couture at a time when world is struggling the impact of Russian invasion on Ukraine, pandemic and looming global recession. Her answer is “to reimagine a better tomorrow”, and to create a “bridge between the savoir-faire of different cultures to bring something meaningful collectively”.

This led to the Monday’s couture show of Dior in Paris, the centre piece of which was the backdrop – the floor-to-ceiling artworks which beautifully lined the Musée Rodin in Paris. This represented a series of joyful and innocent interpretations of the “tree of life” which was laden with flowers, fruits and birds.

These works that perfectly represent “womankind, the continuation of life and a bright future”, according to Dior which is the historic French fashion house and a pioneer in the industry, were by the Kyiv-based artist Olesia Trofymenko. “I like the symbolism of the tree of life a lot,” Chiuri said backstage before the show, wearing her famous “We should all be feminists” T-shirt paired with a black trouser suit. “It means this idea of the circle of life.”

The “tree of life theme” was picked up with full-skirted maxi dresses in the collection in cream, taupe, red tartan and black, which were hand-embroidered with nature motifs beautifully inspired by Trofymenko’s artwork from Kyiv.

Dior building a bridge between cultures

What appealed to Chiuri and inspired her to bring it to the haute couture was the fact that the tree of life is a symbol which is present in many cultures. With this she wants to highlight her ambition to create a “universal decorative language, a new peace-building, hope-lending universal folklore”. “It’s important to have this dialogue and to share these skills,” she said. “When you work by hand, you are close to humanity.”