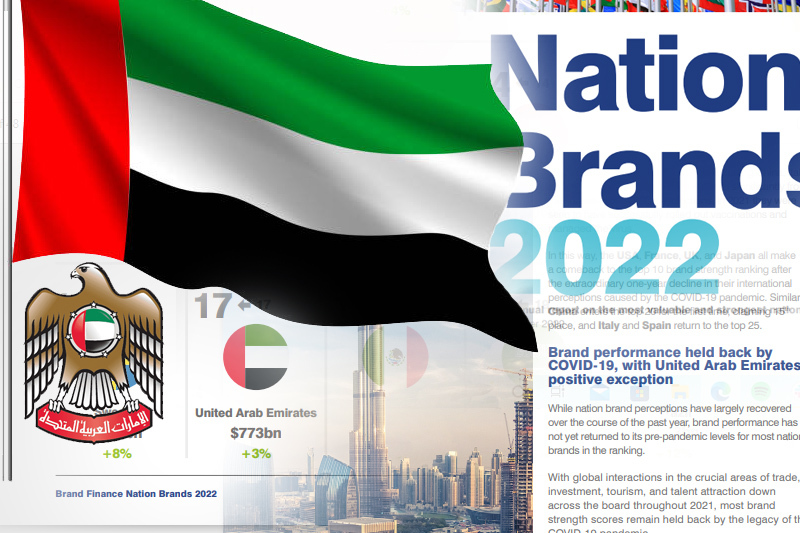 The United Arab Emirates is once again leading the global rating, reiterating its global presence in every sector. The media identity of the UAE has been ranked first globally in the National Media Identity Performance Index for countries, for the year 2022.  The number one rating secured by UAE was confirmed as the strength of the national brand rating for the media identities of countries that was issued by the International Brand Finance Corporation.

The UAE has also showcased a remarkable progress in increasing the global value of its national media identity. The country has been ranked 17th in the world with an economic value standing at $773 billion.

Saeed Mohammed Al-Attar, head of the UAE Government Media Office, stressed that, “The UAE’s presence in the first place globally in the national media identity performance index for countries for the year 2022 reflects the vision of our leadership in consolidating a global image of the country that enjoys unprecedented international recognition, in addition to the UAE’s ability to transform challenges into chances.”

Al-Attar added, “The UAE’s reputation today is one of the country’s largest soft assets… Thanks to the wise leadership, this reputation has reached the best international ranks.”

The head of the UAE Government Media Office added, “Brand Finance International has evaluated more than 100 countries around the world, and the UAE is one of the few countries that has made great progress.”

The national media identity of the UAE has ranked 11th globally in the economic value index. Furthermore, the UAE has been able to successfully strengthen its position as the most valuable national brand in the Middle East and Africa region, with the value of Emirates’ national brand reaching more than 2.8 trillion dirhams (773 billion dollars), establishing a growth rate of 3 per cent as compared to 2021.

The UAE has also bagged 17th rank globally and first in the Middle East and Africa region on the general index of the report, through its outstanding performance in various main indicators including the performance, strength and value of the national brand. In the National Media Identity Strength Index, the UAE also has succeeded in improving its position as the strongest national brand in the Middle East and Africa region with a score of 76.7 out of 100.

The remarkable performance reiterating UAE’s success is a result of the country’s ability to attract trade, investments, tourists and talent as compared to other countries.