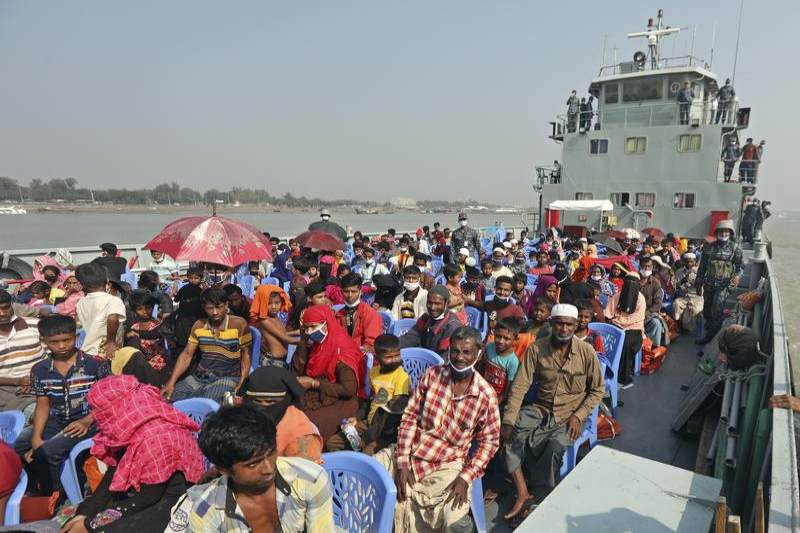 Bangladesh ships out Rohingya refugees to remote island without their consent

Rohingya refugees: Rights group raised the issue regarding thousands of Rohingya refugees being relocated by Bangladeshi government to a remote island without their consent. Reuters reports that the state has already sent over 1,600 Rohingya refugees on Friday, from the country’s southern port of Chittagong to a far island of Bhasan Char in the Bay of Bengal. A naval officer said that the refugees were transported through seven boats, with two extra for carrying the supplies.

Rights groups including Human Rights Watch and Amnesty International slammed the government’s move questioning the habitability of the destination island. Saad Hammadi, Amnesty International’s south Asia campaigner, said: “It is crucial that the Bangladeshi authorities let the UN, rights groups and humanitarian agencies carry out independent assessments of Bhashan Char’s habitability first before taking any steps to relocate people there. No relocation plan, either to Bhashan Char or to another location, can be undertaken without the full and informed consent of the individuals involved.”

Human rights agencies have urged Bangladesh government to immediately halt the relocation operation, till the island was investigated and approved for its living conditions. Bangladeshi authorities have already transported about 1000 Rohingya refugees and has set a target to move 2500 families soon, despite their lack of consent.

The Rohingya refugees had been stuck between a rock and a hard place as they escaped Myanmar ethnic cleansing in 1990s and crossed border for a better life but now have been pushed to a remote island with extreme weather conditions. Besides, the Bhasan Char island, formed on a collected silt of Bay of Bengal is far from mainland, which would make it difficult for relief workers to provide supplies on time in case of any emergency. Besides, Bangladeshi authorities have been coaxing refugee group to relocate to the island, assuring them about the facilities including better housing, mosques, madrasas, markets, along with aid and support from the UN and other humanitarian agencies.

UN was quick to release a statement on Wednesday, clarifying that it didn’t agree to work on the island. UNHCR added it was not part of the relocation drive and asked Bangladeshi government to permit UN officials to conduct an urgent examination of the island.

Among the refugees who spoke to the rights groups, most of them said that they did not want to go to the island. Another refugee from the camp in Kutupalong said, “We don’t believe they can force this many people to relocate against their will under the watch of the international community. Our demand is only rational and that is to get us back to Myanmar, we don’t want to be refugees all our life”