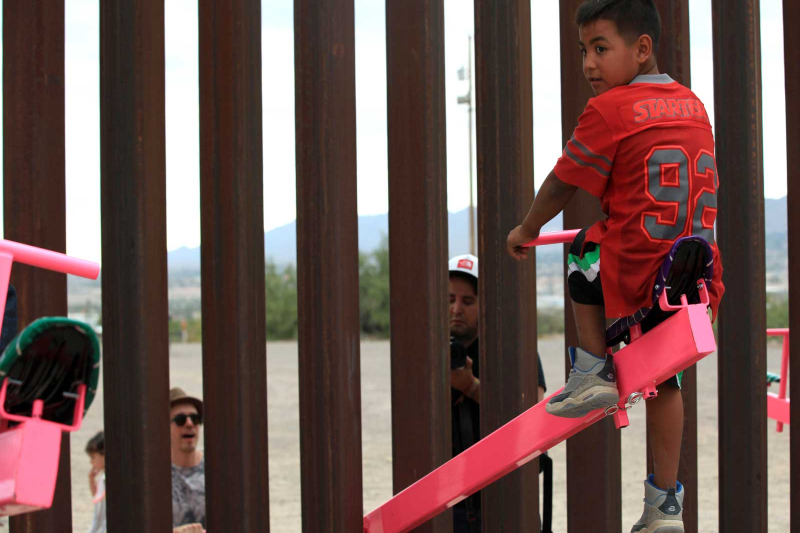 US-Mexico wall, pink swing to fly over. The idea won the prestigious Design of the Year award

A dozen pink swings. Simple but sturdy, in iron. The central pole crosses the border barrier and the seats that rise and fall on one side and the other. The children, happy, playing, and who can look at each other, albeit between the poles that reinforce the wall. It is the work that won the prestigious Design of the Year award among the 74 candidates chosen by the Museum of Design in London for the 13th exhibition, in 2020. The Teeter Totter Wall, during a symbolic 40-minute session, crossed the Wall that divides El Paso in Texas and Ciudad Juárez in Mexico.

It was built by Ronald Rael, professor of Architecture at the University of Berkeley in California, and Virginia San Fratelli, an associate of Design at San José State University. The idea arrived about ten years ago, after the passing of the law in the US, providing the construction of a barrier along the 3,145 kilometers that divides the two North American countries. “It has become increasingly clear, after the latest events in the US, that we do not need to build walls but bridges.” The professor explained. In the video that presented the swings, it is said that they are symbolically important because they show how things can be done.

Other videos had always been shot on the theme in 2019 and had been enormously successful enough to become viral on the social networks. The bright pink is not accidental. The drama of femicide, a real plague on Ciudad Juárez, inspires it. Hundreds of women died, and their bodies were found in the desert surrounding the northern Mexican city. A slaughter effectively described by Sergio Gonzáles Rodriguez in his “Bones in the Desert.” Most of the victims were girls employed in the fabric factories in Ciudad Juárez. Kidnapped, raped, and then killed by assassins on the orders of the city masters.

The two artists wanted to remember that the US-Mexico wall is a legacy that Trump leaves us. Without forgetting, however, that both George W. Bush and Barack Obama did not hesitate to build part of the barrier and to deport hundreds of irregular immigrants. “Trump spoke of the barrier and announced that he would raise it, posing as the man who saved America from invasions. But in reality, he continued the work of the others who had preceded him. Obama and Bush already built it for two thirds.”

The selection for the award was very tough. Swings prevailed over the competitors, including a 3-D reconstruction of the Coronavirus, a Lee Han Jun set design on the Film Parasite, 4 Oscars in 2020, and a stab-proof vest made from the Union flag worn by British rapper Stormzy at Glastonbury in 2019.