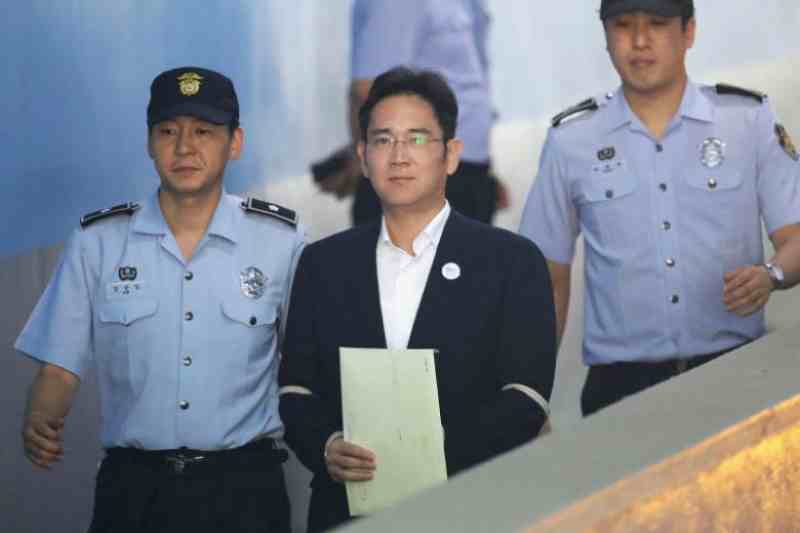 Samsung heir Lee Jae Yong: A high court in South Korea has sentenced Lee Jae two years and six months of prison term. Yong has been sentenced for bribery scandal, the case retrial of the one that had earlier charged former South Korean President Park Geun-hye. Park has also been jailed for bribery and corruption.

The decision has put Samsung’s future in jeopardy and Lee is likely to have ramifications over his future and role in the tech giant. Since 2014 Lee has been the head of Samsung Electronics, after his father Lee Kun-hee, the Samsung group titan, suffered a heart attack and was hospitalized. Mr. Lee Kun-hee passed away last year.

Furthermore, the news of Lee’s sentence plummeted Samsung Electronics shares by over 4%. The shares later took hold of the ground.

Experts fear that the sentencing will lead to a leadership vacuum in Samsung and bring decision-making mechanism to a road-block regarding future major investments.

The court ruled, “Lee actively provided brines and implicitly asked the president to use her power to help his smooth succession” as Samsung head. It added, “It is very unfortunate that Samsung, the country’s top company and proud global innovator, is repeatedly involved in crimes whenever there is a change in political power.”

Lee’s legal team was disappointed with the decision. Lee has 18 months left to be served, as already served detention time would be counted towards the sentence.

This is not the first time that Lee has been accused of bribery and has engaged in a legal battle. Lee was first arrested in February 2017 as he was on verge of becoming Samsung’s leader. The case was regarding his role in a corporate and political scandal that also involved then president Park Geun-hye.

Samsung, under Lee, was accused to paying 43bn won to two non-profit foundations operated by Park’s friend Choi Soon-sil. These foundations had allegedly paved way to make Lee the head of Samsung by baking a controversial merger in Samsung.