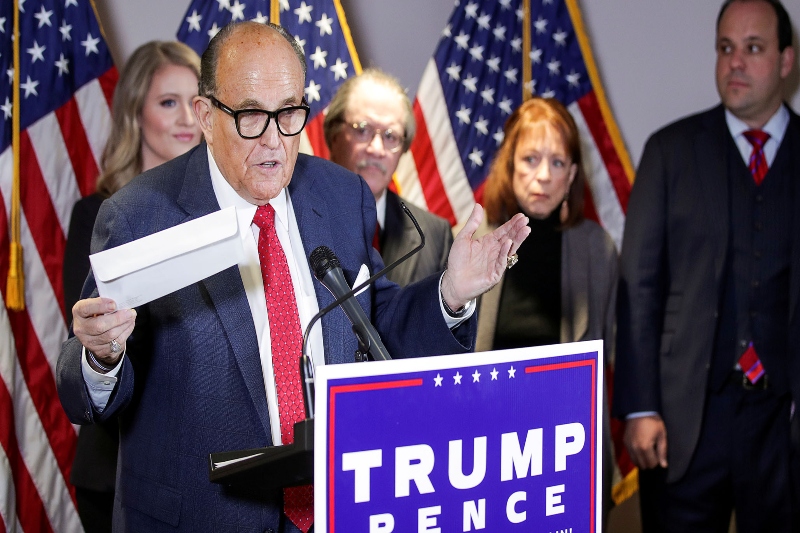 Giuliani claims evidences of U.S. electoral fraud, but he can’t reveal it

Giuliani claims evidences of U.S. electoral fraud: All the fault of the press: “It covers Biden’s misdeeds” directly accused of being “the mind of fraud prepared in advance.” Endorsed by the FBI: “Where have they been in the last four years?”. And then, of course, the usual George Soros who, according to conspiracy theorists, is plotting in the shadows to overturn the world order. Together with the ceased Hugo Chavez, this time he would have hatched a big global scam to make Donald Trump lose the election. Helped by the Philadelphia mafia, organized “Antifa” groups from China, and even the Clinton Foundation. Tool of the mega-fraud would be the company Dominion Voting System which developed the software of the voting machines used in 27 states: it would have linked “with communist companies founded in Venezuela.”

urreal. That is how many American observers have defined the press conference of Rudy Giuliani.  The former mayor of New York City and personal lawyer of Donald Trump, flanked by Sidney Powell, the lawyer of that general Michael Flynn, whose head was the first to fall into the field of Russiagate. Together, from the headquarters of the Republican committee in Washington, they tried to explain why the defeat of the incumbent president would be the result of electoral fraud. Without presenting even a piece of evidence to support the odd thesis. And indeed, reacting to the journalists’ questions accusing them of being in bad faith and ignoring the complaints made: “I have a lot of evidence, but I can’t reveal it. I don’t find witnesses willing to testify in court because they receive intimidation and death threats. They fear that their career will be destroyed. And it’s your fault that you hysterically and biased four years of the Trump administration,” Giuliani said.

The former mayor of New York, 76, is the same one who suggested to the president to play the “Law and Order” card in the wake of the racial protests. Only to be framed by the satirist Sacha Baron Cohen in a scene of the new Borat while lying on the bed of a hotel room full of hidden cameras. He slips his hands in the pants, thinking he is alone with an allegedly underage journalist, initially attacked Biden head-on: “He planned everything.”

Then he corrected himself: “I don’t know if Biden is aware of the fraud or not, I don’t even know how much control he has of the party.” Going to argue that the entire mail-order vote is a fraud: “It could be Mickey Mouse; it could be a dead person. The ballots could have been filled in 30 times by the same person. All of these things have happened. And you don’t want to tell.” And never mind if the 2020 electoral process has been called “the safest in American history” by the Election Infrastructure Government Coordinating Council made up of Homeland Security officials. That statement two days ago prompted President Trump to react in anger, firing the head of the facility, Chris Krebs.

And to think that it was announced as the presentation of the path to victory, the new legal initiatives aimed at demonstrating that Biden victory is only the result of fraud. Instead, it went even worse than the one organized in Philadelphia in the aftermath of the elections. When instead of booking a space at the Four Seasons, the Republican delegation, the usual Giuliani in the lead, accidentally found itself in the backroom of a garden shop in the suburbs.

The head of the outgoing president’s legal team, $ 20,000 a day in fees, therefore pitted the content of affidavits, partly already cited previously, many already rejected by individual courts, insisting that the dem “stole the elections.” And he did it by sweating profusely, to the point of even dripping the dye from his hair – obviously freshly made – down his cheek. Send Twitter users into raptures. Another topic of his tirade was the social distance imposed on the observers: “That in this way they could see little and nothing,” he insisted, even citing a scene by the 1992 movie “My cousin Vinny”.

Meanwhile, Trump’s campaign tries to make yet another federal appeal in Michigan, calling for a halt to the certification of the vote in Wayne County, which includes Detroit. In this country, the ball was unanimously certified by the representatives of the polling station. But now, the two Republicans claim to have done so under threat. The backtracking of the two, however, will hardly invalidate the certification of the vote. The president, determined not to give up until the end, has invited the Republicans of Michigan to the White House for tomorrow. It is not yet clear how many will accept it, but it is an unprecedented step.