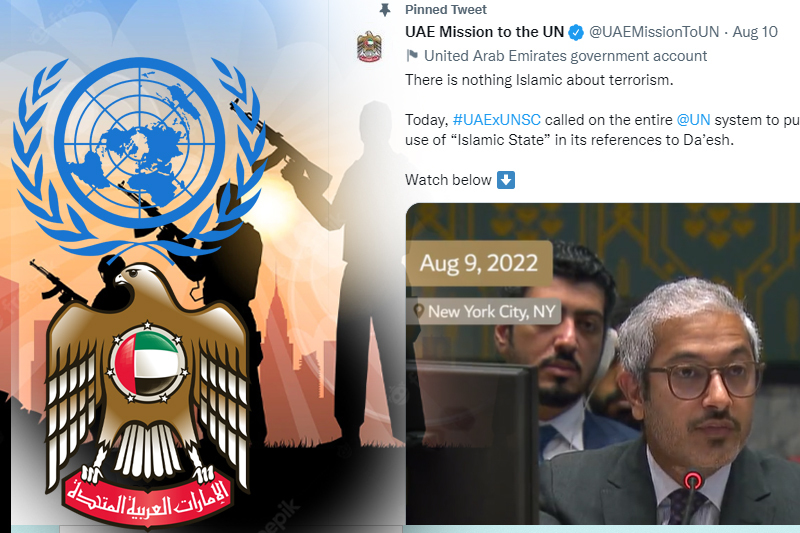 “There is nothing Islamic about terrorism.” These words were spoken by UAE Ambassador and Deputy Permanent Representative and Chargé d’Affaires, Mohamed Abushahab while addressing the United Nations Security Council meeting in New York. The address by the United Arab Emirates’ ambassador to the UN made some very valid points, reiterating the way in which peaceful religion of Islam is being exploited by terrorist organizations.

During the UN Security Council meeting, UAE has urged the UN member nations to stop using term “Islamic State” while referring to the terrorist organization Daesh, by presenting the argument that no religion must be associated with extremists. UAE Ambassador and Deputy Permanent Representative and Chargé d’Affaires, Mohamed Abushahab said in his address to the UNSC, “We take this opportunity to focus on the exploitation of Islam by terrorist groups to justify their acts of violence and hate to self-proclaimed Islamic appellations”, adding that organizations must not “permit Daesh and other groups to hijack a religion of tolerance and give credence to their pretences.”

There is nothing Islamic about terrorism.

Today, #UAExUNSC called on the entire @UN system to put an end to the use of “Islamic State” in its references to Da’esh.

The UAE ambassador’s address comes at a point when UN has underlined the continuing global threat posed by Daesh and its affiliates. “Daesh and its affiliates continue to exploit conflict dynamics, governance fragilities and inequality to incite, plan and organize terrorist attacks,” said UN counter-terrorism chief Vladimir Voronkov.

President of UAE, His Highness Sheikh Mohammed bin Zayed Al Nahyan has time and again stressed, as his predecessor leaders, that the key towards progress is tolerance, co-existence and peaceful harmony not only within the country but also beyond the borders. This has been re-affirmed by Sheikh Mohamed through establishment of real global humanitarian vision, that resulted in Abu Dhabi’s Document on Human Fraternity signed during historic visit by Pope Francis and the Abraham Accords, that emphasized the UAE’s policy to always stand for peace, stability and harmony among all.

“Despite gains made in the elimination of Da’esh leadership, the transnational threat that the group and its affiliates pose to international peace and security is growing,” said Ambassador Mohamed Abushahab, Chargé d’affaires and Deputy Permanent Representative of the UAE to the UN.

UAE has always condemned terrorism in all forms and constantly renewed its commitment to counter the global enemy. In an effort to fight terrorism financing, UAE has taken considerable measures. UAE has ratified 14 international counter terrorism treaties and also participated in alliances against terrorism and extremism. The most significant among these are the Islamic Military Counter Terrorism Coalition and the Arab and international alliances against Daesh, along with supported moderate religious institutions, like Al Azhar.

UAE has stressed that UN and global organizations must work towards preventing next generation to become a part of the terrorism, hinting towards rising trends of children from refugee camps being recruited by extremist groups. “At Al-Hol camp, more than 25,000 children are at potential risk of radicalization,” said Abushahab. “Genuine efforts must be made to give these children hope for a more peaceful and prosperous future.”